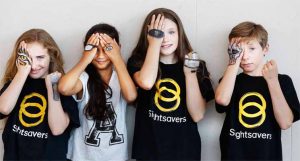 Based in the United Kingdom, Sightsavers works all over the world. This organization helps people maintain their sight and eye health. They work with everyone from governments to individuals to prevent blindness where possible and treat it where it happens.

Recently, Sightsavers has taken a particular interest in trachoma. Trachoma is caused by a bacterium, Chlamydia trachomatis. This bacteria makes the surface of the eyelids rough, which causes pain and deterioration in the eyes. Eventually, the eyelids turn inward. The eyelashes continue to grow and irritate the deteriorating structures of the eye. Without adequate treatment, this infection can cause the cornea to break down. Blindness is the result.

Trachoma is one of the oldest diseases we know of. Evidence of this affliction is seen as far back as ancient Egypt. Today, treatment for trachoma is simple. Caught early, it can be resolved with antibiotics in a matter of days or weeks. Later-stage cases can even be treated with corneal transplants. Unfortunately, access to proper treatment is not available to the people who are most at risk.

Even now, trachoma is distressingly common in impoverished areas. Today, over 180 million people are at risk of developing this painful disease. This bacteria spreads by contact. That means that in areas where clean water and hand-washing are rare, it becomes very common. Sightsavers’ strategy of improving environmental conditions and providing education about hygiene make a real difference in preventing this disease.

When it strikes, trachoma is devastating to communities. This disease makes it impossible for children to read, and school becomes much more difficult. Blind adults find it hard to get jobs because of their disability. In this way, trachoma not only impacts an individual’s health. It can keep whole families and villages poor.

Though much of the world is still at risk for trachoma, progress is being made. Organizations like Sightsavers have partnered with governmental agencies, pharmaceutical companies and communities to eliminate it. This strategy has proved effective. Trachoma has disappeared from several countries already. In 2012, Oman announced trachoma had been eliminated. Countries like Mexico, Laos and Cambodia weren’t far behind.

Sightsavers’ founder John Wilson was moved to form the organization after witnessing the extent of blindness in the developing world. The team from Sightsavers knows he would be bursting with pride if he could see the progress they’ve made in eliminating trachoma. And they’re excited that they now have funding to do even more.

In recent years, UK Aid has pledged over $20 million to help eliminate trachoma around the Commonwealth. Pfizer continues to donate antibiotics for these efforts. For now, Sightsavers is continuing to do great work on the ground and foster good relationships with all the players in this equation. With all this momentum, the Sightsavers team believes that trachoma will soon be nothing more than a bad memory.