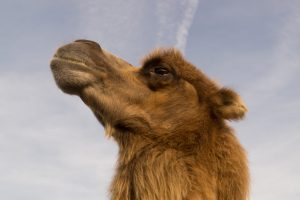 A dozen camels have been banned from a beauty competition in Saudi Arabia for receiving Botox injections to make them more attractive. The beauty contest is part of the annual King Abdulaziz Camel Festival in Rumah. The festival typically involves up to 30,000 camels.

According to Saudi media, a veterinarian was caught giving the camels the injections a few days before the pageant. The vet was also surgically reducing the size of the animals’ ears. In addition to the disqualification, the camels’ owners may also be liable for legal penalties for violating Saudi Arabia’s animal welfare laws.

For the pageant, all beauty must be “natural.” The rules of the pageant say “[i]n case of fraud to change the natural form of participating camels, the participant shall be excluded immediately.” Violators will be banned from this year’s contest, as well as the next five sessions of the festival.

The beauty contest was originally launched in 2000. About $31.8 million in prizes is awarded to winners of the pageants. Camels also compete in races and an obedience competition for prize money. According to the organizers, total prize money for the festival is about $57 million.

With so much money at stake, cheaters will begin to alter an animal’s appearance months before the contest to gain an edge on the competition. The son of a leading Emirati camel breeder said, “They use Botox for the lips, the nose, the upper lips, the lower lips and even the jaw.” Other cheating methods include using hormones to make the camel more muscular and lathering the coats with oil to make them appear darker.

To guard against cheating camels must be microchipped to compete and some competitions require blood testing. Competing camels must also stay overnight at judging pens before the competition. Before winners are announced, owners must swear on the Quran about a camel’s age and ownership.

The chief judge of the show, Fawzan al-Madi, says, “The camel is a symbol of Saudi Arabia. We used to preserve it out of necessity, now we preserve it as a pastime.” Nick Stewart of advocacy group World Animal Protection said that there is “no justification to use Botox on camels,” calling the practice cruel and demeaning.

The monthlong festival, which runs through January, is the largest in the Persian Gulf area. This year’s festival attendance has risen by as much as a third, attracting at least 300,000 visitors.