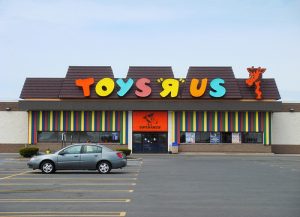 Toys R Us Inc. has announced plans to close about 180 U.S. stores as part of its reorganization plan. The closures are scheduled to begin next month and the majority of the targeted locations will go dark by mid-April. The company still must obtain court approval for the closures.

The store closures are part of the company’s plan to emerge from its bankruptcy, filed last September for protection from its creditors. Toys R Us has struggled with debt since private-equity firms Bain Capital, KKR & Co. and Vornado Realty Trust took it private in a $6.6 billion leveraged buyout in 2005. While the private equity firms planned to take the company public again, weak sales have prevented them from making that move. The company cited an unsustainable $5 billion debt load in its bankruptcy filing.

Toys R Us had a challenging Christmas shopping season in the U.S. and overseas. The company has suffered through years of lackluster results. More stores are likely be shuttered over the next couple of years. Toys R Us closed its flagship store in Manhattan’s Times Square about two years ago.

Chief Executive Officer Dave Brandon said in a statement, “The actions we are taking are necessary to give us the best chance to emerge from our bankruptcy proceedings as a more viable and competitive company that will provide the level of service and experience you should expect from a market leader.”

Brandon wants to make locations easier to shop and more fun. The plan includes revamping a dozen locations to better combine the baby and toy businesses into one co-branded experience. The company is also planning to cut the number of items offered in locations to reduce inventory. He also wants to revamp the retailer’s loyalty program and pricing model to be more competitive.

Toys R Us is the world’s largest toy chain. Many companies rely on the company to introduce new offerings to consumers. Toys R Us still sells about 20 percent of the toys bought in the U.S.