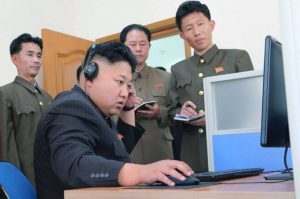 The United States government has publicly blamed North Korea for being behind the massive WannaCry computer virus that affected hundreds of thousands of computers around the world earlier this year. While North Korea has been widely suspected of creating the virus, the U.S. government had not publicly said so until now. Thomas P. Bossert, Trump’s homeland security adviser, said, “We do not make this allegation lightly. It is based on evidence. We are not alone with our findings, either.”

The virus infected more than 230,000 computers in more than 150 countries beginning on May 12 and cost countries billions. The cyberattack crippled hospitals, banks and other companies across the world. Britain’s National Health Service was severely affected, along with companies such as FedEx Corp. and Nissan Motor Co.

The virus was paired with ransomware that encrypted data on victims’ computers and demanded money to restore access. Users had 72 hours to pay $300 in bitcoin, or pay twice as much, but paying didn’t unlock their computers. Bossert said, “This was a reckless attack and it was meant to cause havoc and destruction.”

Reports emerged in June that the National Security Agency had linked North Korea to the creation of the worm. The British government stated in October that it believed North Korea was responsible, and has stated that “the decision to publicly attribute this incident sends a clear message that the U.K. and its allies will not tolerate malicious cyber activity.” In November, the CIA reached to the same conclusion.

Public awareness about North Korea’s growing cyber capabilities is rising. The reclusive country has established a pattern of disruptive and damaging cyber activity. Technical details of North Korean cyber tools and operational infrastructure have been released by the U.S. government.

The country’s hacking operations have been operating for at least a decade, moving into cybercrime with ransomware in the last few years. Hackers are a low-cost, high-impact tool that can easily harm more powerful nations. The United States has few options left to retaliate against North Korea, as the country is already one of the most heavily sanctioned countries in the world. Last week, Facebook and Microsoft acted to disable North Korean accounts.

North Korea is also believed to be responsible for hacking Sony Pictures networks, sowing chaos by stealing and releasing corporate emails. It is likely that Sony Pictures was targeted because the studio was scheduled to release a satirical film depicting leader Kim Jong Un’s assassination. Economic sanctions from the Obama administration followed the Sony attack.