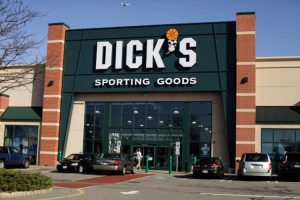 During trading on Tuesday afternoon, Dick’s Sporting Goods shares plunged after the sporting goods retailer came up short of expectations and cut its forecast for earnings.

The price of Dick’s shares plunged 18% after gains during quarter to quarter still came up short of Wall Street’s expectations. It was the company’s worst one day of trading in history and executives gave a bleak picture moving ahead.

It will be painful for a period, said Dick’s CEO Edward Stack. The CEO lowered the earnings guidance at Dick’s for the year by 17% due to a drop in sales of sports apparel and hunting.

CFO Lee Belitsky said that the company’s hunting business ended the quarter very soft, while sales at same stores dropped by double digits. The CFO added that the drop had been worse than what was expected.

The company has shotguns, rifles and guns fired by black powder typically used in hunting, including kids’ small frame rifles.

Demand for gear related to hunting has trended down. The plunge at Dick’s follows poor earnings earlier in August from gun and hunting products retailer Cabela and gun maker Sturm Ruger.

A plunge in the number of background checks to purchase guns during July was reported by the Federal Bureau of Investigation.

The CFO added that too much supply led to discount pricing across the hunting industry in an attempt to move the overhang in inventory.

He added that pricing was irrational, adding that the supply chain needed to be cleaned out.

Dick’s does not supply a break out of its guns sales by gun, but sales experience a decline industry wide since President Donald Trump was elected even though he as a Republican was given an endorsement by the National Rifle Association.

Retailers as well as customers stocked up on both guns and ammunition in expectation of Hillary Clinton winning the presidency and she is an advocate for gun control.

However, sales spiraled downward since the victory by Trump last November.

Dick’s sells apparel and shoes as well as, for a variety of different sports from soccer to baseball to kayaking and biking.

However, the overall sporting goods market is suffering. Sales were down 4.9% through the end of July of 2017 for the U.S. government category that includes sporting goods, book, hobby and music stores, showed data from the U.S. Commerce Department.