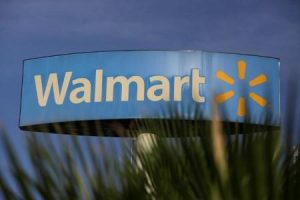 Walmart reported on Thursday sales and earnings for its second quarter that beat Wall Street expectations, with the big-box retailer continuing to grow its business online.

Fresh new digital initiatives along with an increase in the assortment of products online, helped the giant retailer in increasing transactions online by over 60%, said the company.

During the just ended quarter, sales online were up 63% compared to a growth of 29% for the previous quarter.

Although several retailers struggled to attract shoppers to their brick and mortar locations, Walmart posted growth in sales at same stores at locations in the U.S. for the twelfth straight quarter, fueled from its growth in traffic of 1.3%, said company officials.

Revenue at the retailers reached $123.4 billion versus estimates that averaged $122.85 billion.

Sales at same stores across the U.S. excluding fuel, increased by 1.7%, which were in line with expectations.

Despite these results, Walmart shares were down at one point during premarket trades by 2%.

One analyst said the report was not over the top, but solid. Walmart stock has been an outperformer lately, said the analyst, which can cause a temporary selloff at times.

One Walmart weakness for the quarter was profit margins dropped slightly because of more promotions. The huge retailer has invested heavily to maintain competitive prices to defend the market share it has from Amazon as well as other rivals.

Walmart also has invested heavily in growing its operations online, and those moves have yielded results.

The retailer, based in Bentonville, Arkansas said its earnings were 96 cents a share for the just ended three-month period. Excluding one-off items, the company said per share earnings had reached $1.08.

Comparable sales at U.S. Walmart locations, a metric that is closely watches by Wall Street for all retailers, were up 1.8%, including fuel. However, excluding sales of fuel comps across the U.S. rose 1.7%, which included a 1.2% growth at Sam’s Club locations, and an increase of 1.8% at it Walmart locations.