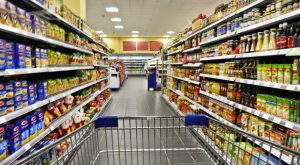 Consumer prices in the U.S. rose in July just slightly as the cost of food increased but was offset somewhat by dropping prices of a host of other goods, but suggesting the existence of benign inflation that might persuade the U.S. Federal Reserve to hold off another increase in rates until December.

However, with the U.S. labor market at close to full employment and the growth accelerating in the economy, analysts expect the central bank to announce its plan to begin unwinding its huge bond portfolio at its September policy meeting.

On Friday, one Wall Street analyst said that he believes the Fed will place its focus in September on its balance sheet, and forego another hike in interest rates until the end of the year. The inflation outlook, added the analyst will not drastically change over the short-term.

On Friday, the U.S. Labor Department announced that its monthly Consumer Price Index moved higher by 0.1% during July. In June, the CPI was unchanged. The increase lifted the rise year on year for the CPI from 1.6% to 1.7%.

Economists forecasted that the CPI would rise 0.2% for July and climb year on year by 1.8%.

Stripping away the more volatile components of energy and food, consumer prices were up 0.1% for the fourth consecutive month. The core CPI was up 1.7% in 12 months through the end of July and now has increased by the same margin for three straight months.

Despite only a modest increase in the consumer price index, which comes following a drop in July for producer prices, several economists share the conviction of the Fed that transitory factors continued to hold back inflation.

Janet Yellen the chairperson at the Fed told Capitol Hill lawmakers in July that special factors that included prices of mobile phone plans as well as prescription drugs had been partly responsible for lower inflation readings. Prices of mobile plans continued their drop during July, falling by over 0.3%.

Prices of government debt in the U.S. rose initially on the data over inflation, but gains were pared after Sergei Lavrov the Foreign Minister of Russia said there was a plan between Russia and China to defuse the tensions between the U.S. and North Korea.

The Fed’s inflation target is 2% and the measure has remained at 1.5% since May. Inflation is tame despite a labor market that is tightening, creating conundrum for the Fed as it contemplates the tightening even further of the monetary policy.