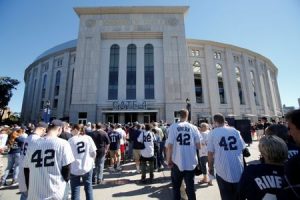 The giant in e-commerce has studied the ticket sales space, which for the most part is dominated in the United States by Ticketmaster owned by Live Nation.

Amazon reportedly found a healthy potential for opportunity, said a source within the company.

There is still room left in the industry when it comes to the consumer experience, as Ticketmaster is known to take grief from many clients for its practices and fees.

There is also interest for sports leagues, sports teams and venue operators, since they want to grow their ticket sales with a variety of distribution streams.

Thus far, Ticketmaster has been successful in fending off any potential competitors, including startup platforms for ticketing such as Front Gate and Universe.

Of course, Amazon is not your average competitor and far from being an upstart, as it carries far more weight than any other possible competition for Ticketmaster.

In addition, Amazon has existing relationships already in place with important players in the music industry, and arguably one of the biggest, addressable bases of customers with information on file for payment options that has ever been amassed.

Amazon talked with Ticketmaster, according to the news agency, about a possible partnership in the U.S., but sources have claimed the talks stalled.

Amazon has talked as well to leagues regarding the potential secondary market of ticket resales, similar to StubHub, the report said.

Where difficulty might come for Amazon to move forward in a possible endeavor into ticket sales, is related to customer data.

Venues as well as team owners want specific info of their customers to help develop the correct approach to marketing focused on the most lucrative customers, but Amazon is reluctant to share that data in a possible partnership for ticket sales.

Ticket sales may also end up turning into another driver for memberships to Prime. Amazon could secure large blocks of tickets for their Prime members for events that are high-demand, open pre-sales early or offer other benefits that are exclusive for members of Prime.

It is a model used already by other programs that are membership based including cardholder programs by American Express.

Amazon has not made any public statement about the possibility of it entering into this industry, but the likelihood it will venture into ticket sales is high.