Sales at Macy’s Drop for the Tenth Consecutive Quarter 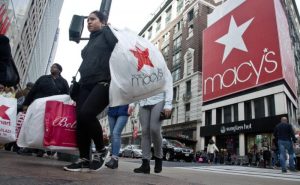 On Thursday, iconic department store chain Macy’s announced that is comparable sales had dropped by 2.8% during its second quarter. That marked the tenth straight three-month period of declines for the department store retailer.

However, the results did not end up as bad as many investors had been worried about. Wall Street was expecting comparable sales for Macy’s to drop by over 3.5%, showed data from Consensus Metrix.

Stores’ comparable sales are sales from stores that have been opened for a minimum of one full year. Profit by one of the measures reached 48 cents per share, which was higher than 45 cents per share analysts had been expecting.

Total net sales were down 5.4% ending the quarter at just over $5.55 billion and slightly exceeding Wall Street’s expectations.

Despite results that were not as bad as had been expected, Macy’s kept its forecast for the full year the same, which suggests it looks at the improvements as being fragile.

Investors became spooked and drove down shares of Macy’s by 2% during trading before the opening bell on Thursday, to reach $22.50 or about 50% of the price of their high for 52 weeks.

The largest department store in the U.S. has grappled with the exodus of today’s shoppers to online rivals such as Amazon.com, which in 2017 has eclipsed Macy’s as an apparel retailer.

Macy’s is now in the process of shuttering dozens of its stores to focus on those properties that are performing better. Meanwhile, it continues to pour billions into its e-commerce, which is currently the sixth biggest U.S. based e-commerce retailer.

However, Macy’s has been hit by the weakness in the overall apparel industry, its largest category, and merchandise that is the same across its department stores, which forces it to resort to hefty discounting.

In addition, shopper traffic across most malls in free-falling. As a response, Macy’s which earlier in the year hired a new CEO, is working through many new initiatives, from managing leaner inventory, to lining exclusive merchandise, to growing its Backstage brands that is T.J. Maxx-like.

The retailer is set to introduce its new loyalty program during late 2017, as it begins shifting its resources for marketing away from the deep discounting. The retailer’s goal is to become today’s fashion authority, said Jeff Gennette, Macy’s CEO.