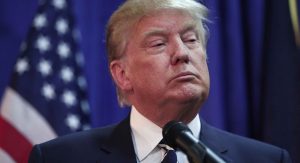 President Trump had originally announced the tariffs in March. Several U.S. allies received temporary exemptions from the tariffs while they negotiated potential limits on shipments to the United States. The United States has negotiated voluntary export limits with several other nations, including South Korea, Argentina, Australia, and Brazil.

The president sees a rising tide of imports as a threat to the domestic metals industry. However, companies that use imported metals say that the action endangers U.S. jobs and investment. A statement from the Motor & Equipment Manufacturers Association made after the tariffs were announced said, “Our members could face having to pay double tariffs on some materials necessary to manufacture parts in the U.S.”

The European Union has promised retaliation against American products, including Kentucky bourbon and Harley-Davidson motorcycles. Britain said in a statement, “We are deeply disappointed that the US has decided to apply tariffs to steel and aluminium imports from the EU on national security grounds. The UK and other European Union countries are close allies of the US and should be permanently and fully exempted from the American measures on steel and aluminium.”

European leaders have said they will lodge a complaint with the World Trade Organization about the U.S. tariffs. Jean-Claude Junker, president of the European Commission, said, “This is protectionism, pure and simple.” Mexico has also announced tariffs on multiple U.S. agricultural and industrial products in retaliation.

U.S. Commerce Secretary Wilbur Ross said that he intends to continue talks with officials from Canada, Mexico, and Europe. He said, “We continue to be quite willing, indeed eager, to have further discussions with all of these parties.”