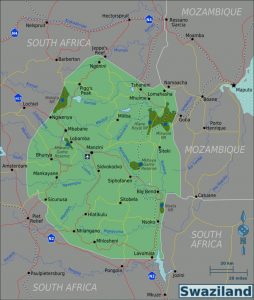 King Mswati III of Swaziland has decided to change the name of his country. The country will henceforth be known as eSwatini, meaning “land of the Swazis” in the local language. The king announced the name change during a ceremony to mark his 50th birthday in the city of Manzini.

The king, who has reigned since 1986, is one of the world’s few remaining absolute monarchs. Mswati inherited the kingdom from his father, Sobhuza II, upon his death in 1982. Since he was a teenager at the time, his mother served as regent and officially retains a status of joint ruler of the kingdom.

The king was quoted as saying, “We no longer shall be called Swaziland from today forward.” In recent years, the king has used the name eSwatini in addresses to his country’s Parliament, to the United Nations General Assembly, and to the African Union. The country will have to register its new name with international bodies, including the UN and the Commonwealth, of which it is part.

The king added that the renaming would also help resolve an international branding issue. The kingdom’s name had long caused confusion with the similarly named Switzerland.

Swaziland is a landlocked, rural nation in southern Africa slightly smaller than New Jersey. Nearly a third of the country’s population lives in extreme poverty and most of the population relies on subsistence agriculture. The country is contending with a recent drought and an infestation of invasive armyworms that has devastated crops. The country also has one of the world’s highest prevalence rates for H.I.V.

Swaziland gained independence from Britain on Sept. 6, 1968, but retained its colonial-era name. Many African countries changed their names upon independence to reflect their history, native language, and people. Rhodesia became Zimbabwe, Northern Rhodesia became Zambia, Nyasaland became Malawi, and Bechuanaland became Botswana, to cite a few examples. Kenya, Gambia, and Uganda did not change their names upon gaining independence.