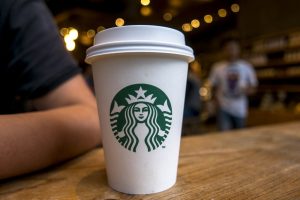 Starbucks Corp. (NASDAQ: SBUX) is in hot water after a video of two black men being arrested while waiting at one of the coffee chain’s stores went viral. The video of the incident has been viewed more than 10 million times on Twitter. The arrests prompted a #BoycottStarbucks hashtag on social media and protests at the store.

The arrested men were accused of trespassing simply for asking to use the restroom while waiting on a business associate. An employee refused the request because the men had not bought anything. The men were asked to leave the store, but they declined, saying that they had not done anything wrong and that they were waiting for someone.

An employee eventually called the police. The Philadelphia police released audio of a female caller who reported “two gentlemen at my cafe who are refusing to make a purchase or leave.” The video appears to show police officers handcuffing both men, who do not resist. The prosecutor’s office in Philadelphia reviewed the case and declined to pursue charges because of “a lack of evidence that a crime was committed.”

Starbucks apologized two days after the episode. Kevin R. Johnson, the company’s chief executive, said in a statement, “I’ve spent the last few days in Philadelphia with my leadership team listening to the community, learning what we did wrong and the steps we need to take to fix it.” The company has refused to name the employee who called the police but says that the employee is no longer employed by Starbucks.

Starbucks said it would close more than 8,000 of its company-owned stores in the United States on May 29 to provide “racial bias” training for nearly 175,000 employees. Starbucks operates more than 9,400 stores in the United States, Canada and Latin America and has over 250,000 employees worldwide. In the company’s most recent fiscal year, its stores generated $1.3 billion in revenue.

“Unconscious bias” training has dramatically risen in popularity and become a buzzword in corporate diversity circles in recent years. The training aims to teach employees to be aware of ingrained biases and form strategies for blunting their effects. Starbucks spokeswoman Jaime Riley could not offer any further detail about the training format.