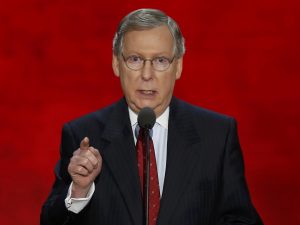 Reports have emerged that Senate leaders have reached a bipartisan agreement on the federal budget. Senators Mitch McConnell of Kentucky, the majority leader, and Chuck Schumer of New York, his Democratic counterpart, have apparently reached an agreement for a short-term spending package that would also raise the federal debt limit. The budget deal and a stopgap spending measure would keep the government open past Thursday, when the current funding measure is set to expire.

The deal includes $20 billion for infrastructure, $6 billion for the opioid crisis and mental health, $5.8 billion for child care and $4 billion for veterans’ hospitals and clinics. It also includes about $90 billion in disaster relief for last year’s wildfires and hurricanes. On top of the six-year extension of funding for the Children’s Health Insurance Program approved by Congress last month, the agreement includes an additional four-year funding extension. The deal also lifts the debt limit until March 2019.

Schumer said of the deal, “After months of legislative logjams, this budget deal is a genuine breakthrough. After months of fiscal brinkmanship, this budget deal is the first real sprout of bipartisanship.” McConnell said, “I hope we can build on this bipartisan momentum and make 2018 a year of significant achievement for Congress, for our constituents and for the country that we all love.”

The budget agreement came a day after President Trump threatened to shut down the government. President Trump announced his support of the deal, tweeting, “Republicans and Democrats must support our troops and support this Bill!” Defense Secretary Jim Mattis and Speaker Paul D. Ryan of Wisconsin both quickly embraced it. Ryan said, “America will be safer and stronger because of this agreement.”

If the short-term deal passes, the next step would be for lawmakers to put together a long-term spending package that would fund the government through September 2019. Lawmakers would have six weeks, until March 23, to pass a long-term funding package.

The passage of the deal in the House is not a foregone conclusion. There is likely to be opposition from at least some Democrats and fiscal conservatives. Representative Nancy Pelosi of California, the House Democratic leader, has said the spending package does nothing for the “Dreamers”, young immigrants brought to the country illegally as children. Representative Mo Brooks, Republican of Alabama, said, “This is a dead-end path that will cause great hardship to Americans.”