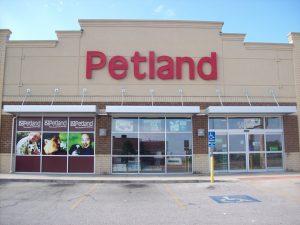 A multistate outbreak of Campylobacter infections has been traced to puppies sold at Petland pet stores. The Centers for Disease Control and Prevention says that lab tests and epidemiological findings have linked the illnesses to Petland. According to officials with the CDC, no deaths have been reported.

The outbreak has sickened at least 39 people in Ohio, Kansas, Missouri, Wisconsin, Tennessee, Pennsylvania and Florida. Twenty-seven of those diagnosed with Campylobacter infections bought a Petland puppy, visited a home with a Petland-purchased puppy, or visited one of the chain’s stores. Twelve more are Petland employees. Nine people have been hospitalized since last September

The Campylobacter bacteria is a common cause of diarrheal illness. Symptoms of the infection include bloody diarrhea, vomiting and fever. The bacteria can spread through contact with animal feces. The CDC estimates that about 1.3 million cases of Campylobacter occur in people each year, about one-third of which come from animals and other non-food sources. Most people who get sick recover within a week without any specific treatment.

Most Campylobacter infections do not spread from one person to another. Infected animals can spread the bacteria to people even though they might not show any symptoms. The agency said that only some of the Petland puppies had any symptoms. Petland chief executive Joe Watson said the company’s health warranty would cover vet-related costs for customers whose puppies were infected. Watson said, “We take every precaution possible to ensure the health of our pets.”

The Ohio-based Petland operates a nationwide chain of about 80 stores selling pets and pet products. It is now the only major national chain selling dogs from commercial breeders. The company says it only sells puppies from breeders licensed by the U.S. Department of Agriculture with clean federal inspection reports. More than 200 cities and counties have enacted laws that ban pet shops from selling puppies from so-called puppy mill.

In an interview, Matthew Liebman, director of litigation for the Animal Legal Defense Fund, said, “It’s not hard to see how animals raised in these cramped and unsanitary conditions, trucked hundreds of miles from puppy mills to the pet stores, intermingled with other fragile young animals and handled by numerous employees and customers could become disease vectors.”

The animal group filed a class-action lawsuit against Petland in July alleging that the company knowingly sold puppies to customers that it knew were prone to illnesses and other defects. Watson called the lawsuit’s allegations “baseless.”