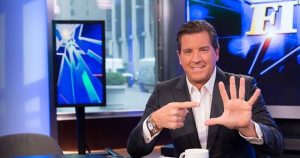 Eric Bolling, a longtime Fox News host was suspended by the network over the weekend pending their investigation into reports that he allegedly sent lewd photographs to three women colleagues using text messages.

Fox News found out about the allegations against Bolling following an inquiry by the HuffPost, said the network in a statement it distributed through email.

On Friday night, an article was published by HuffPost citing anonymous sources that said Bolling sent a photo that had male genitalia that was not solicited, via a text message to two colleagues in Fox Business and one at Fox News.

The article said that the messages were sent several years ago as well as on separate occasions.

An attorney representing Bolling was not immediately available to respond to emails that sought comments about the allegations and subsequent suspension.

However, he said to HuffPost that Bolling does not recall any inappropriate communications and does not believe that he sent any of those communications. His attorney said Bolling will pursue legal remedies for defamatory and false accusations made.

Fox News over the weekend said that a law firm would carry out its investigation and added that substitute hosts would be rotated in fill in for Bolling on the show he is co-host of.

Bill O’Reilly another host at Fox News was forced out of the network this past April after a New York Times report contained several sexual harassment allegations against O’Reilly.

Roger Ailes also was ousted as the CEO and Chairman of the network last July following allegations he sexually harassed co-workers who were female.

In 2008, Bolling started working for Fox Business Network and has been the host or co-host of several programs broadcast by Fox including Happy Hour, Follow the Money and The Five.

In 2014, Bolling came under criticism for making a comment about a United Arab Emirates female pilot Major Mariam al-Mansouri, who was the leader of an airstrike on the Islamic State.

The comment made reference to “boobs on the ground.” He later made an apology on air for his comments the following day.