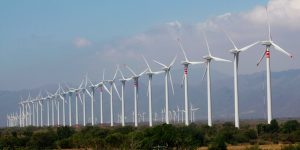 General Electric and Invenergy LLC have revealed that they are planning on putting up a wind farm in the state of Oklahoma that will have the capacity to generate 2 gigawatts of power. This will make the project the biggest U.S. wind farm and will be part of a project worth $4.5 billion aimed at providing approximately 1.1 million energy utility customers with electricity.

The project is expected to come online in three years and will be situated in the Oklahomian panhandle. To transmit the electricity from the wind farm to Tulsa, there will be a dedicated power line that will be 350-mile long linking the two places.

Utility regulators in the states of Oklahoma, Texas, Arkansas and Louisiana are being asked by American Electric Power to give their approval for the plans to construct the power line. The dedicated power line is expected to serve customers of its regulated utility units which include the Southwestern Electric Power Company and the Public Service Company of Oklahoma. And once the construction of the wind farm is complete American Electric Power plans to acquire the power generation project from Invenergy.

Wind turbines will be sourced from General Electric and each of the 800 units that General Electric will provide will have a capacity to generate 2.5 megawatts. This translates to an annual production of 9 million megawatt hours which can meet the needs of Oklahoma for approximately two months.

In recent years wind power costs have seen a dramatic fall and this has ensured that this source of power is competitive when compared to fossil fuels. Over a period of 25 years, utility companies expect to save over $7 billion. The project will result in the creation of 80 permanent jobs while there will be another 4,000 direct jobs which will be created in the construction phase.