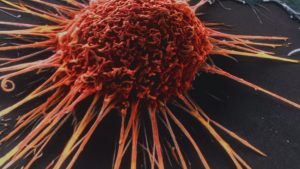 The fight against cancer has long been a medical benchmark always hard to hit, but we are coming a long way. From a better understanding to its molecular behavior to vast advances in medical technology, humans definitely have the best chance of all time to beat cancer.

Today, we are looking at the latter—technology–in the fight against deadly brain tumors.  Scientists have found that a cap-like device can produce electric fields around the head which can actually fight cancer and improve patient survival. This is the first discovery of its kind in ten years of research.

The device is known as Optune, which is made by the Jersey-based (English island) Novocure, who sells the machines to hospitals and clinics in not only the United States but also Switzerland, Germany, and Japan for the treatment of adults who have aggressive glioblastoma multiforme cancer.  The treatment is designed to augment chemotherapy after surgery and radiation in order to reduce the likelihood of recurring tumors.

For this treatment, patients shave their scalp and cover their bare heads with strips of electrodes. Of course, these electrodes are connected to a small generator, which is wired and can simply be kept in a small bag. Patients can wear the cap along with a hat and even go about their normal day, receiving the treatment along the way; though it is recommended to use the device upwards of 18 hours every single day.

It supposedly works by creating low intensity, alternating electric fields that disrupt cell division — confusing the way chromosomes line up — which makes the cells die. Because cancer cells divide often, and normal cells in the adult brain do not, this in theory mostly harms the disease and not the patient.

Of course, the study is still somewhat preliminary—and skeptical docs argue that the therapy is not, exactly, a “cure”—but the study showed cancer patients with brain tumors were more than twice as likely to live five additional years after receiving the cap treatment than patients who received only chemotherapy (13 percent vs 5 percent).

At the same time, not everyone will be able to get the treatment, even if it were 100 percent effective: it costs upwards of $21,000 every single month.

Preliminary (and mild) results—and a hefty price tag—aside, this data is refreshing.

“You cannot argue with them — they’re great results,” chuckles Brigham and Women’s Hospital chief of neurosurgery, Dr. Antonio Chiocca, noting also that the results are not likely a result of some kind of placebo effect.