Family Christian Retail Store Chain To Close All of Its Stores 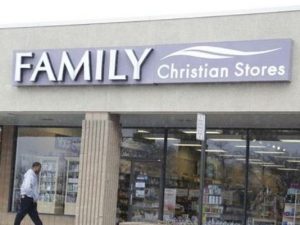 Christian retail store chain Family Christian has just announced a plan to close all of its stores. After 85 years in business, the self-proclaimed (and it is probably true) “world’s largest retailer of Christian-themed merchandise” is retiring all 240 locations in 36 states, as a result of steadily declining sales. The Grand Rapids, MI company employees in excess of 3,000 people.

In response to the announcement, company president Chuck Bengochea reports “We had two very difficult years post-bankruptcy. Despite improvements in product assortment and the store experience, sales continued to decline.” He goes on to notes that the nonprofit could not successfully reorganize terms and pricing with vendors following its bankruptcy and this, of course, would complicate the company’s position in the retail market.

Bengochea goes on to say, “Despite improvements in product assortment and the store experience, sales continued to decline. In addition, we were not able to get the pricing and terms we needed from our vendors to successfully compete in the market… We have prayerfully looked at all possible options, trusting God’s plan for our organization, and the difficult decision to liquidate is our only recourse.”

In addition to selling Christian merchandise, the company is also well known for its humanitarian aid efforts. Since opening their doors, the company has served more than 14 million widows, orphans and other oppressed people throughout the world.
Now, when the company had initially filed for bankruptcy, Bengochea noted that the company had taken on “too much debt” because of declining sales. This was followed by the hard-hitting recession of 2008-09 and pressure from digital revolution which has changed the way that people buy books, movies, and music (media).

The president of CBA (which is formerly known as the Christian Booksellers Association), commented recently that he was saddened by this loss in the community. Curtis Riskey notes, “Family Christian Stores has been an important part of a global network of Christian product providers, yet this decision will not change the strength of our industry’s mission to make God’s name known.”

Also, Riskey adds, “This news brings to light the importance of adapting to a changing marketplace and changes in consumer behavior and can be a catalyst that encourages us in the Christian products industry to find new ways to work together and learn from each other as we continue to equip people with life-giving resources.”