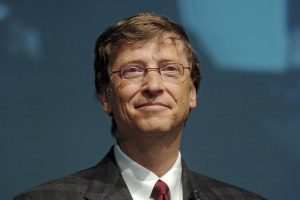 Gates leads a veritable all-star cast of investors who plan to announce, today, the Breakthrough Energy Ventures fund. This fund will begin making investments next year—and for the next 20 years—in streamlining the commercialization of new technologies for the specific reduction of greenhouse-gas emissions within the public areas of electricity generation and storage, industrial processes, agriculture, transportation, and energy-system efficiency.

In a nutshell, Gates describes the fund saying: “Anything that leads to cheap, clean, reliable energy we’re open-minded to.”

Serving as the fund’s chairman, Gates acknowledges that he has been surprised, lately, by the fact that technology innovation is not discussed more as the fundamental solution to climate change. After all, advances in clean energy could, in fact, limit economic trade-offs from switching away from carbon-emitting fossil fuels. He notes, “All of that takes place just as a normal market mechanism as you replace energy sources with other ways to do it.”

Gates also goes on to discuss that investing in clean energy technology is actually much harder than investing in information technology: “People think you can just put $50 million in and wait two years and then you know what you got. In this energy space, that’s not true at all.”
However, he also adds that this investing field has lots of room for growth. “It’s such a big market,” he explains, “that the value if you’re really providing a big portion of the world’s energy, the value of that will be super, super big.”

With that in mind, BEV estimates that the global energy market is already poised to boom at $6 trillion; and energy demand will increase by at least one third within the next 15 years.
Finally, Gates comments, “The dialogue with the new administration as it comes in about how they see energy research will be important. The general idea that research is a good deal fortunately is not a partisan thing.”

“Being a 20-year fund with patient capital that’s not needing short-term gains allows us to have a longer-term outlook as well as fund technologies that don’t fit into the traditional VC model as it exists today,” says Arnold.