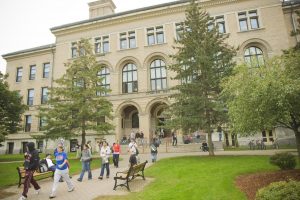 Massachusetts has announced an initiative to offer tuition rebates to full-time students in the state. Called the Commonwealth Commitment, the program gives students a 10 percent rebate on tuition and fees at the end of each completed semester. It is the first program of its kind in the nation.

The program will be phased in over a period of two academic years, beginning in September. Students entering community colleges beginning this fall and existing students who have earned no more than 15 credits are eligible to apply. The colleges will pay for cost of the initiative with scholarship funds, but the price is yet unknown as there is no estimate for how many students will participate. Massachusetts currently has about 260,000 students attending the state’s 15 community colleges, nine state universities and five campuses of the University of Massachusetts.

The rebates would be available to students who begin their studies at a community college and complete a bachelor’s degree at a state university. Tuition and mandatory fees will be frozen at the level at which they entered the program until they graduate. It is estimated that the rebates will provide an average savings of $5,090 on the cost of a four-year degree. University of Massachusetts president Marty Meehan said he hopes the program will get more students to earn bachelor’s degrees in 4 to 4½ years.

There are some restrictions on qualifying for the tuition rebates. Prospective students must be Massachusetts residents. Participants must complete a two-year, associate’s degree at one of the state’s 15 community colleges in 2-1/2 years or less and transfer to a state university to complete a bachelor’s degree in no more than two years. Participants also must choose to study at least one of 24 majors selected for the program. Engineering and nursing majors are not eligible due to their higher costs. Students must also maintain a cumulative grade point average of 3.0 or higher.

Higher education tuition and fees seem to be rising uncontrollably. The high cost of college tuition has emerged as an issue in the 2016 presidential race, with multiple candidates laying out their plans to makek it easier for students to afford college. President Barack Obama has pushed to make tuition free at community colleges across the country.