SeaWorld Entertainment (NYSE:SEAS – Get Rating) issued its quarterly earnings data on Thursday. The company reported $1.62 EPS for the quarter, topping analysts’ consensus estimates of $1.60 by $0.02, Briefing.com reports. The company had revenue of $504.80 million for the quarter, compared to analysts’ expectations of $504.35 million. SeaWorld Entertainment had a negative return on equity of 562.22% and a net margin of 16.87%. The firm’s quarterly revenue was up 14.8% on a year-over-year basis. During the same quarter in the previous year, the firm posted $1.59 earnings per share.

In other news, CEO Marc Swanson sold 4,000 shares of the business’s stock in a transaction that occurred on Friday, July 15th. The stock was sold at an average price of $41.07, for a total transaction of $164,280.00. Following the completion of the transaction, the chief executive officer now directly owns 174,129 shares in the company, valued at $7,151,478.03. The sale was disclosed in a legal filing with the SEC, which is accessible through this link. Insiders own 1.00% of the company’s stock.

SeaWorld Entertainment, Inc, together with its subsidiaries, operates as a theme park and entertainment company in the United States. The company operates SeaWorld theme parks in Orlando, Florida; San Antonio, Texas; and San Diego, California, as well as Busch Gardens theme parks in Tampa, Florida, and Williamsburg, Virginia. 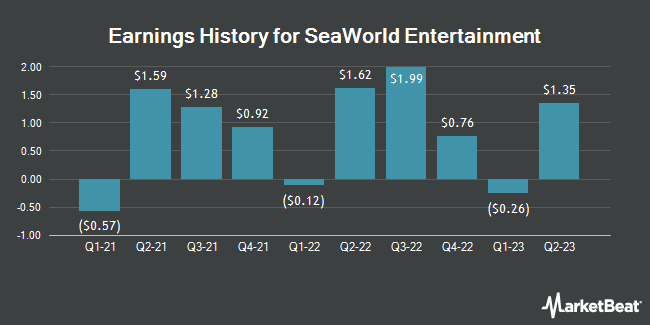 Complete the form below to receive the latest headlines and analysts' recommendations for SeaWorld Entertainment with our free daily email newsletter: