Oxford Lane Capital Corp. (NASDAQ:OXLC – Get Rating) declared a monthly dividend on Thursday, August 4th, Wall Street Journal reports. Stockholders of record on Monday, October 17th will be paid a dividend of 0.075 per share by the investment management company on Monday, October 31st. This represents a $0.90 annualized dividend and a dividend yield of 14.22%. The ex-dividend date of this dividend is Friday, October 14th.

Oxford Lane Capital (NASDAQ:OXLC – Get Rating) last released its earnings results on Friday, May 6th. The investment management company reported $0.43 earnings per share for the quarter, topping analysts’ consensus estimates of $0.30 by $0.13. The firm had revenue of $55.10 million during the quarter, compared to the consensus estimate of $64.80 million.

Oxford Lane Capital Corp. is a close ended fund launched and managed by Oxford Lane Management LLC. It invests in fixed income securities. The fund primarily invests in securitization vehicles which in turn invest in senior secured loans made to companies whose debt is rated below investment grade or is unrated. 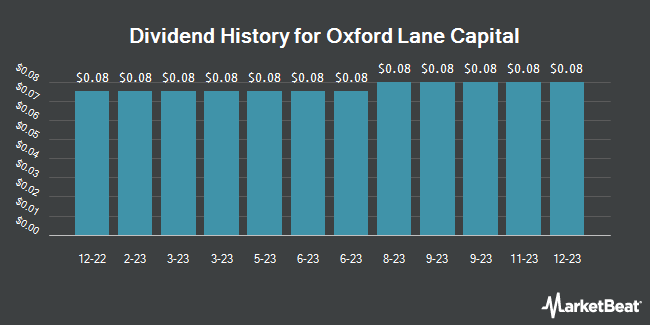 Tidewater Midstream and Infrastructure Price Target Cut to C$1.60 by Analysts at Royal Bank of Canada

Complete the form below to receive the latest headlines and analysts' recommendations for Oxford Lane Capital with our free daily email newsletter: