AZEK (NYSE:AZEK) Given a $20.00 Price Target by Stephens Analysts

AZEK (NYSE:AZEK – Get Rating) last announced its quarterly earnings data on Tuesday, May 10th. The company reported $0.33 earnings per share for the quarter, beating analysts’ consensus estimates of $0.30 by $0.03. AZEK had a net margin of 8.49% and a return on equity of 11.08%. The firm had revenue of $396.26 million for the quarter, compared to analyst estimates of $368.06 million. During the same period in the previous year, the company earned $0.22 earnings per share. The business’s quarterly revenue was up 35.2% compared to the same quarter last year. On average, sell-side analysts expect that AZEK will post 0.98 EPS for the current year.

About AZEK (Get Rating)

The AZEK Company Inc engages in designing, manufacturing, and selling building products for residential, commercial, and industrial markets in the United States. It operates through two segments: Residential and Commercial. The Residential segment designs and manufactures engineered outdoor living products, which includes decking, railing, trim and moulding, and accessories under the TimberTech, AZEK Exteriors, VERSATEX, and ULTRALOX brand name. 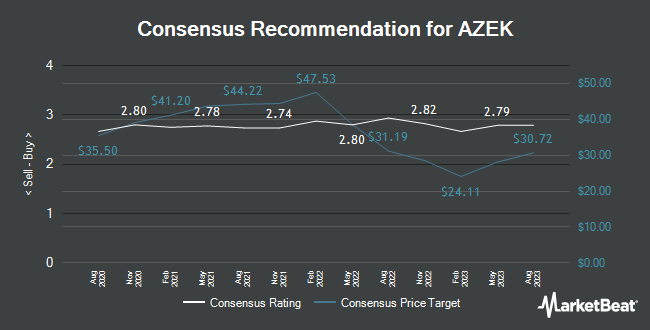 Receive News & Ratings for AZEK Daily - Enter your email address below to receive a concise daily summary of the latest news and analysts' ratings for AZEK and related companies with MarketBeat.com's FREE daily email newsletter.

Complete the form below to receive the latest headlines and analysts' recommendations for AZEK with our free daily email newsletter: