-$0.95 Earnings Per Share Expected for AnaptysBio, Inc. (NASDAQ:ANAB) This Quarter

Wall Street analysts expect AnaptysBio, Inc. (NASDAQ:ANAB – Get Rating) to report earnings per share (EPS) of ($0.95) for the current fiscal quarter, according to Zacks. Four analysts have issued estimates for AnaptysBio’s earnings. The lowest EPS estimate is ($1.17) and the highest is ($0.59). AnaptysBio reported earnings of ($0.02) per share during the same quarter last year, which indicates a negative year-over-year growth rate of 4,650%. The business is scheduled to report its next earnings report on Monday, January 1st.

Zacks’ EPS averages are an average based on a survey of analysts that cover AnaptysBio.

AnaptysBio (NASDAQ:ANAB – Get Rating) last announced its quarterly earnings data on Wednesday, May 4th. The biotechnology company reported ($1.31) EPS for the quarter, missing analysts’ consensus estimates of ($0.99) by ($0.32). AnaptysBio had a negative net margin of 143.46% and a negative return on equity of 20.44%.

In related news, major shareholder Ecor1 Capital, Llc bought 668,237 shares of the stock in a transaction that occurred on Thursday, May 5th. The shares were bought at an average cost of $21.63 per share, for a total transaction of $14,453,966.31. Following the completion of the transaction, the insider now owns 7,521,024 shares of the company’s stock, valued at $162,679,749.12. The acquisition was disclosed in a filing with the Securities & Exchange Commission, which can be accessed through this hyperlink. Company insiders own 34.90% of the company’s stock.

About AnaptysBio (Get Rating) 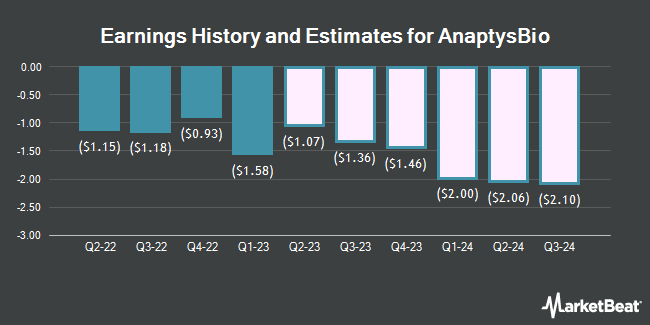 Ultiledger Price Up 5.9% This Week

Complete the form below to receive the latest headlines and analysts' recommendations for AnaptysBio with our free daily email newsletter: