$395.01 Million in Sales Expected for Tripadvisor, Inc. (NASDAQ:TRIP) This Quarter

Wall Street brokerages expect that Tripadvisor, Inc. (NASDAQ:TRIP – Get Rating) will announce sales of $395.01 million for the current fiscal quarter, according to Zacks. Four analysts have provided estimates for Tripadvisor’s earnings. The lowest sales estimate is $367.00 million and the highest is $423.71 million. Tripadvisor posted sales of $235.00 million during the same quarter last year, which suggests a positive year-over-year growth rate of 68.1%. The firm is scheduled to announce its next earnings results on Monday, January 1st.

On average, analysts expect that Tripadvisor will report full-year sales of $1.43 billion for the current financial year, with estimates ranging from $1.36 billion to $1.50 billion. For the next fiscal year, analysts expect that the company will post sales of $1.69 billion, with estimates ranging from $1.62 billion to $1.83 billion. Zacks Investment Research’s sales averages are an average based on a survey of sell-side research analysts that cover Tripadvisor.

Tripadvisor (NASDAQ:TRIP – Get Rating) last announced its quarterly earnings results on Wednesday, May 4th. The travel company reported ($0.09) earnings per share for the quarter, missing the consensus estimate of ($0.08) by ($0.01). Tripadvisor had a negative net margin of 9.80% and a negative return on equity of 12.01%. The firm had revenue of $262.00 million for the quarter, compared to analysts’ expectations of $249.70 million. During the same period in the previous year, the company earned ($0.56) EPS. The company’s quarterly revenue was up 113.0% on a year-over-year basis.

In other news, Director Gregory B. Maffei acquired 50,000 shares of Tripadvisor stock in a transaction on Friday, March 4th. The stock was acquired at an average cost of $22.38 per share, for a total transaction of $1,119,000.00. The acquisition was disclosed in a document filed with the SEC, which is accessible through this link. 3.50% of the stock is currently owned by company insiders.

TripAdvisor, Inc operates as an online travel company. It operates in two segments, Hotels, Media & Platform; and Experiences & Dining. The company operates TripAdvisor-branded websites, including tripadvisor.com in the United States; and localized versions of the website in 40 markets and 20 languages. 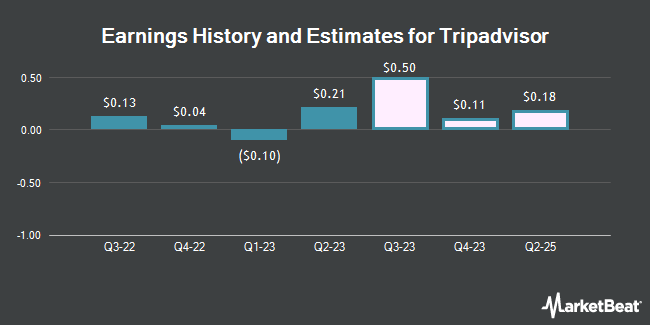 Complete the form below to receive the latest headlines and analysts' recommendations for Tripadvisor with our free daily email newsletter: