CHX has been the topic of a number of research analyst reports. Barclays boosted their price objective on shares of ChampionX from $29.00 to $35.00 and gave the company an “overweight” rating in a report on Monday, November 1st. The Goldman Sachs Group initiated coverage on shares of ChampionX in a report on Friday, September 17th. They set a “sell” rating and a $22.00 price objective on the stock. Finally, Zacks Investment Research lowered shares of ChampionX from a “buy” rating to a “hold” rating in a report on Tuesday, October 19th. One analyst has rated the stock with a sell rating, three have given a hold rating and six have given a buy rating to the stock. According to MarketBeat, the stock has a consensus rating of “Buy” and a consensus price target of $25.28.

ChampionX (NASDAQ:CHX) last issued its quarterly earnings data on Wednesday, October 27th. The company reported $0.15 earnings per share for the quarter, missing analysts’ consensus estimates of $0.18 by ($0.03). The firm had revenue of $818.79 million during the quarter, compared to analyst estimates of $795.93 million. ChampionX had a return on equity of 5.13% and a net margin of 2.61%. The company’s revenue was up 29.2% on a year-over-year basis. During the same quarter last year, the company posted $0.03 EPS. Research analysts expect that ChampionX Co. will post 0.58 earnings per share for the current year.

In other news, CAO Antoine Marcos sold 48,345 shares of the business’s stock in a transaction dated Friday, November 5th. The shares were sold at an average price of $27.25, for a total transaction of $1,317,401.25. The transaction was disclosed in a legal filing with the Securities & Exchange Commission, which is accessible through this link. Corporate insiders own 0.83% of the company’s stock.

ChampionX Corp. engages in the provision of chemistry programs and services for global upstream oil and natural gas industry. It operates under the following segments: Oilfield Performance, Specialty Performance, and Corporate and other Segment. It provides applications and technology for drilling, production, and midstream.

Featured Article: How to Invest in an Index Fund 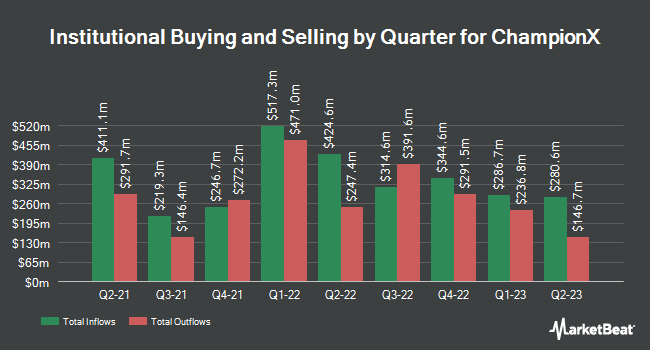 Complete the form below to receive the latest headlines and analysts' recommendations for ChampionX with our free daily email newsletter: