In other Apartment Income REIT news, CEO Terry Considine sold 31,052 shares of the business’s stock in a transaction dated Monday, December 27th. The stock was sold at an average price of $53.38, for a total transaction of $1,657,555.76. The transaction was disclosed in a filing with the Securities & Exchange Commission, which is accessible through the SEC website. 1.06% of the stock is owned by insiders.

The firm also recently disclosed a quarterly dividend, which was paid on Tuesday, November 30th. Stockholders of record on Friday, November 12th were given a $0.44 dividend. This represents a $1.76 dividend on an annualized basis and a dividend yield of 3.23%. The ex-dividend date of this dividend was Wednesday, November 10th. Apartment Income REIT’s dividend payout ratio is currently -382.61%.

AIR is a real estate investment trust focused on the ownership and management of quality apartment communities located in the largest markets in the United States. AIR is one of the country's largest owners and operators of apartments, with 99 communities in 12 states and the District of Columbia.

Want to see what other hedge funds are holding AIRC? Visit HoldingsChannel.com to get the latest 13F filings and insider trades for Apartment Income REIT Corp. (NYSE:AIRC). 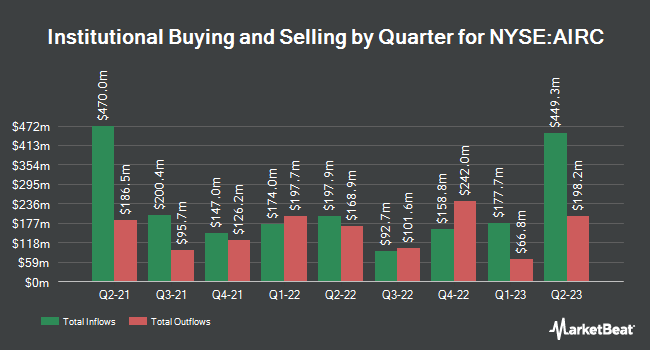 Head to Head Review: DigiPath vs. Its Rivals

$30.79 Billion in Sales Expected for JPMorgan Chase & Co. This Quarter

Complete the form below to receive the latest headlines and analysts' recommendations for Apartment Income REIT with our free daily email newsletter: