Chewy (NYSE:CHWY) last posted its quarterly earnings results on Tuesday, August 31st. The company reported ($0.04) earnings per share for the quarter, missing the Zacks’ consensus estimate of ($0.02) by ($0.02). Chewy had a return on equity of 47.79% and a net margin of 0.13%. The company had revenue of $2.16 billion for the quarter, compared to analysts’ expectations of $2.17 billion. During the same period in the prior year, the business earned ($0.08) EPS. The business’s revenue for the quarter was up 26.8% on a year-over-year basis. On average, sell-side analysts expect that Chewy will post 0.07 earnings per share for the current fiscal year.

Chewy, Inc engages in the provision of pure-play e-commerce business. It supplies pet medications, food, treats and other pet-health products and services for dogs, cats, fish, birds, small pets, horses, and reptiles. The company was founded by Ryan Cohen and Michael Day in September 2011 and is headquartered in Dania Beach, FL.

Featured Article: What is a blue-chip stock? 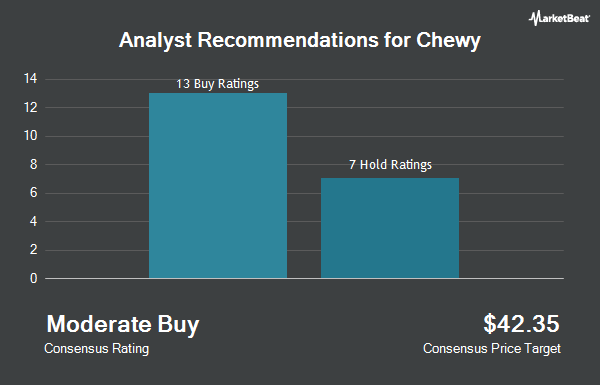 Receive News & Ratings for Chewy Daily - Enter your email address below to receive a concise daily summary of the latest news and analysts' ratings for Chewy and related companies with MarketBeat.com's FREE daily email newsletter.

Altice USA, Inc. Expected to Announce Earnings of $0.51 Per Share

Complete the form below to receive the latest headlines and analysts' recommendations for Chewy with our free daily email newsletter: