Mackenzie Financial Corp trimmed its stake in QIAGEN (NYSE:QGEN) by 5.4% during the second quarter, according to its most recent 13F filing with the SEC. The firm owned 312,635 shares of the company’s stock after selling 17,776 shares during the period. Mackenzie Financial Corp owned about 0.14% of QIAGEN worth $15,125,000 as of its most recent filing with the SEC.

QIAGEN (NYSE:QGEN) last issued its quarterly earnings results on Thursday, July 29th. The company reported $0.67 earnings per share for the quarter, topping the Zacks’ consensus estimate of $0.66 by $0.01. The firm had revenue of $567.31 million during the quarter, compared to analysts’ expectations of $562.35 million. QIAGEN had a net margin of 21.92% and a return on equity of 21.31%. During the same quarter in the prior year, the business earned $0.55 EPS. On average, analysts forecast that QIAGEN will post 2.45 earnings per share for the current fiscal year.

QIAGEN NV is a holding company, which engages in the provision of sample and assay technology to transform biological samples into valuable molecular insights. It offers bioinformatics, molecular diagnostics, next-gen sequencing, and genomic services. The company was founded by Detlev H. Riesner and Metin Colpan on April 29, 1996 and is headquartered in Venlo, the Netherlands.

Recommended Story: What is the operating income formula?

Want to see what other hedge funds are holding QGEN? Visit HoldingsChannel.com to get the latest 13F filings and insider trades for QIAGEN (NYSE:QGEN). 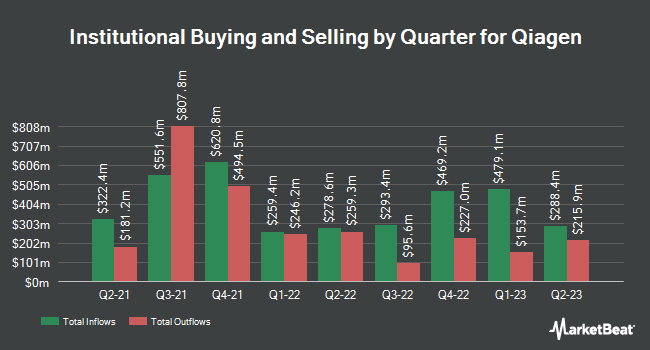 Receive News & Ratings for QIAGEN Daily - Enter your email address below to receive a concise daily summary of the latest news and analysts' ratings for QIAGEN and related companies with MarketBeat.com's FREE daily email newsletter.

Complete the form below to receive the latest headlines and analysts' recommendations for QIAGEN with our free daily email newsletter: