FLC Capital Advisors purchased a new stake in Organon & Co. (NYSE:OGN) during the second quarter, according to its most recent disclosure with the SEC. The firm purchased 6,837 shares of the company’s stock, valued at approximately $207,000.

In related news, Director Ma. Fatima Francisco purchased 3,000 shares of the firm’s stock in a transaction that occurred on Thursday, August 19th. The stock was acquired at an average cost of $33.79 per share, for a total transaction of $101,370.00. The purchase was disclosed in a document filed with the Securities & Exchange Commission, which is accessible through the SEC website.

Organon & Co. (NYSE:OGN) last announced its earnings results on Thursday, August 12th. The company reported $1.72 earnings per share for the quarter, beating the consensus estimate of $1.49 by $0.23.

The firm also recently disclosed a quarterly dividend, which was paid on Monday, September 13th. Stockholders of record on Monday, August 23rd were paid a $0.28 dividend. The ex-dividend date was Friday, August 20th. This represents a $1.12 annualized dividend and a dividend yield of 3.32%.

Organon & Co, a science-based pharmaceutical company, develops and delivers health solutions through a portfolio of prescription therapies within women's health, biosimilars, and established brands. Its women's health portfolio comprises contraception and fertility brands, such as Nexplanon/Implanon, a long-acting reversible contraceptive.

Featured Article: Mutual funds are not immune from market timing

Want to see what other hedge funds are holding OGN? Visit HoldingsChannel.com to get the latest 13F filings and insider trades for Organon & Co. (NYSE:OGN). 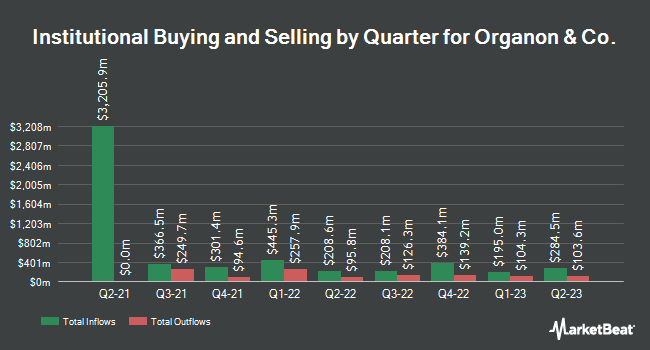 Complete the form below to receive the latest headlines and analysts' recommendations for Organon & Co. with our free daily email newsletter: