Wall Street analysts expect Zogenix, Inc. (NASDAQ:ZGNX) to report earnings of ($0.94) per share for the current fiscal quarter, according to Zacks Investment Research. Five analysts have issued estimates for Zogenix’s earnings, with the lowest EPS estimate coming in at ($1.05) and the highest estimate coming in at ($0.81). Zogenix reported earnings of ($1.02) per share in the same quarter last year, which would indicate a positive year-over-year growth rate of 7.8%. The firm is expected to issue its next quarterly earnings report on Monday, November 8th.

According to Zacks, analysts expect that Zogenix will report full-year earnings of ($3.76) per share for the current year, with EPS estimates ranging from ($4.18) to ($3.50). For the next fiscal year, analysts expect that the firm will report earnings of ($2.25) per share, with EPS estimates ranging from ($4.45) to ($0.19). Zacks Investment Research’s earnings per share calculations are an average based on a survey of sell-side research analysts that follow Zogenix.

Zogenix (NASDAQ:ZGNX) last released its quarterly earnings results on Thursday, August 5th. The company reported ($1.05) earnings per share (EPS) for the quarter, missing the consensus estimate of ($0.93) by ($0.12). The company had revenue of $18.79 million for the quarter, compared to the consensus estimate of $17.06 million. Zogenix had a negative return on equity of 68.36% and a negative net margin of 558.42%.

In other Zogenix news, Director Cam L. Garner bought 10,000 shares of the firm’s stock in a transaction that occurred on Tuesday, August 10th. The stock was purchased at an average price of $14.83 per share, for a total transaction of $148,300.00. The acquisition was disclosed in a filing with the SEC, which can be accessed through the SEC website. 4.10% of the stock is owned by corporate insiders.

Zogenix, Inc is a pharmaceutical company. The firm engages in the development and commercialization of central nervous system (CNS) therapies and products for the treatment orphan diseases and other CNS disorders. Its products include Fintepla and MT1621. The company was founded by Stephen James Farr, Cam L.

Further Reading: Why is cost of goods sold important? 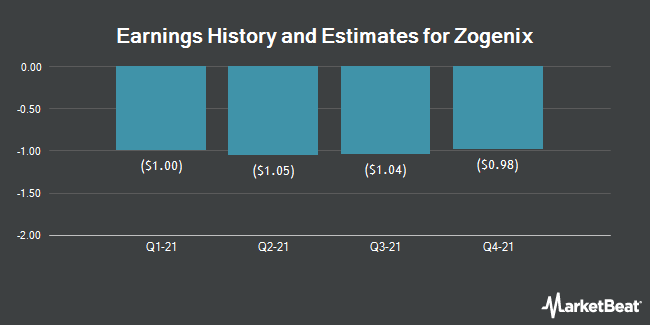 Receive News & Ratings for Zogenix Daily - Enter your email address below to receive a concise daily summary of the latest news and analysts' ratings for Zogenix and related companies with MarketBeat.com's FREE daily email newsletter.

Viasat, Inc. Given Consensus Recommendation of “Buy” by Brokerages

Complete the form below to receive the latest headlines and analysts' recommendations for Zogenix with our free daily email newsletter: