-$1.18 Earnings Per Share Expected for Zymeworks Inc. (NYSE:ZYME) This Quarter

Equities analysts predict that Zymeworks Inc. (NYSE:ZYME) will announce earnings of ($1.18) per share for the current quarter, according to Zacks Investment Research. Four analysts have issued estimates for Zymeworks’ earnings, with the highest EPS estimate coming in at ($1.01) and the lowest estimate coming in at ($1.38). Zymeworks posted earnings per share of ($1.43) in the same quarter last year, which indicates a positive year over year growth rate of 17.5%. The company is scheduled to announce its next quarterly earnings results on Tuesday, November 2nd.

On average, analysts expect that Zymeworks will report full-year earnings of ($4.58) per share for the current fiscal year, with EPS estimates ranging from ($5.00) to ($4.07). For the next fiscal year, analysts forecast that the company will post earnings of ($4.76) per share, with EPS estimates ranging from ($5.08) to ($4.24). Zacks’ earnings per share calculations are an average based on a survey of sell-side analysts that cover Zymeworks.

Zymeworks (NYSE:ZYME) last released its earnings results on Wednesday, August 4th. The company reported ($1.31) earnings per share for the quarter, missing the Zacks’ consensus estimate of ($1.05) by ($0.26). The firm had revenue of $1.77 million for the quarter, compared to analyst estimates of $7.26 million. Zymeworks had a negative return on equity of 57.78% and a negative net margin of 1,073.23%.

ZYME has been the subject of a number of research analyst reports. Raymond James set a $74.00 price objective on shares of Zymeworks and gave the company a “strong-buy” rating in a research report on Monday, September 13th. Zacks Investment Research cut shares of Zymeworks from a “hold” rating to a “strong sell” rating in a research note on Wednesday, August 11th. Finally, HC Wainwright reissued a “buy” rating and issued a $44.00 target price on shares of Zymeworks in a research note on Monday. One investment analyst has rated the stock with a sell rating, three have assigned a hold rating, four have issued a buy rating and one has assigned a strong buy rating to the company’s stock. According to data from MarketBeat, Zymeworks currently has an average rating of “Buy” and a consensus target price of $50.13.

In other Zymeworks news, CEO Ali Tehrani sold 3,800 shares of the company’s stock in a transaction dated Thursday, July 15th. The shares were sold at an average price of $36.00, for a total transaction of $136,800.00. Following the sale, the chief executive officer now directly owns 264,125 shares of the company’s stock, valued at $9,508,500. The sale was disclosed in a legal filing with the Securities & Exchange Commission, which is available through this link. 5.14% of the stock is currently owned by corporate insiders.

Zymeworks, Inc is a clinical-stage biopharmaceutical company, which engages in the discovery, development and commercialization of biotherapeutics. Its product, ZW25 and ZW49 are a bispecific antibody that cans two non-overlapping epitopes. The company was founded by Anthony Fejes, J. Haig deB Farris, Nick Bedford, Ali Tehrani and Andrew S.

Further Reading: What is a Market Correction? 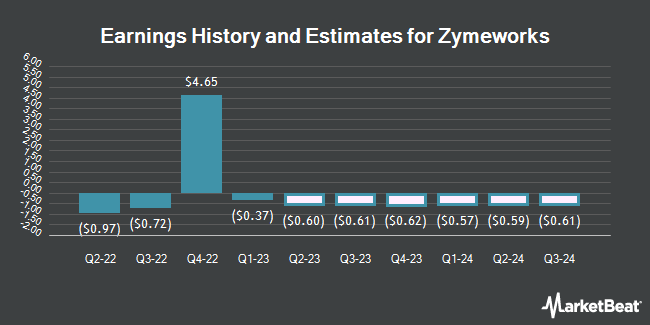 Complete the form below to receive the latest headlines and analysts' recommendations for Zymeworks with our free daily email newsletter: