According to Zacks, analysts expect that Processa Pharmaceuticals will report full year earnings of ($0.78) per share for the current year. For the next year, analysts forecast that the business will post earnings of ($0.97) per share. Zacks Investment Research’s EPS averages are a mean average based on a survey of sell-side research analysts that follow Processa Pharmaceuticals.

Processa Pharmaceuticals (NASDAQ:PCSA) last released its quarterly earnings results on Thursday, August 12th. The company reported ($0.20) earnings per share for the quarter, missing the consensus estimate of ($0.15) by ($0.05).

Separately, Oppenheimer started coverage on Processa Pharmaceuticals in a research report on Monday, August 2nd. They set an “outperform” rating and a $20.00 target price for the company.

In other news, CEO David Young purchased 10,000 shares of the company’s stock in a transaction on Wednesday, June 23rd. The shares were acquired at an average price of $7.67 per share, for a total transaction of $76,700.00. Following the purchase, the chief executive officer now owns 345,190 shares in the company, valued at $2,647,607.30. The acquisition was disclosed in a filing with the SEC, which is available through the SEC website. In the last quarter, insiders have acquired 17,000 shares of company stock worth $121,650. Company insiders own 25.70% of the company’s stock.

Processa Pharmaceuticals, Inc engages in the discovery, development, and commercialization of drug products for the treatment of serious medical conditions. Its lead product candidate is PCS499, which is intended for the treatment of Necrobiosis Lipoidica. The company was founded by David Young, Patrick Lin, Sian E. 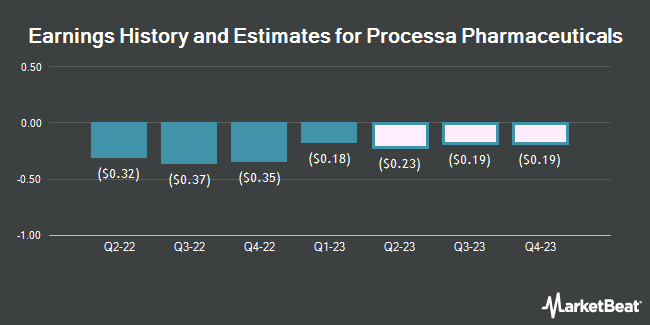 Complete the form below to receive the latest headlines and analysts' recommendations for Processa Pharmaceuticals with our free daily email newsletter: