Shares of Eastman Chemical (NYSE:EMN) have earned an average rating of “Buy” from the fourteen analysts that are covering the company, Marketbeat Ratings reports. Three research analysts have rated the stock with a hold rating and eight have assigned a buy rating to the company. The average 12 month target price among brokerages that have issued ratings on the stock in the last year is $125.54.

Eastman Chemical (NYSE:EMN) last announced its quarterly earnings results on Sunday, August 1st. The basic materials company reported $2.46 earnings per share for the quarter, beating the Thomson Reuters’ consensus estimate of $2.33 by $0.13. Eastman Chemical had a return on equity of 17.52% and a net margin of 3.43%. The firm had revenue of $2.65 billion for the quarter, compared to analysts’ expectations of $2.40 billion. During the same period in the prior year, the business posted $0.85 earnings per share. The company’s revenue was up 37.9% on a year-over-year basis. Equities research analysts forecast that Eastman Chemical will post 9.23 EPS for the current fiscal year.

The company also recently announced a quarterly dividend, which will be paid on Friday, October 1st. Shareholders of record on Wednesday, September 15th will be paid a $0.69 dividend. This represents a $2.76 annualized dividend and a yield of 2.64%. The ex-dividend date is Tuesday, September 14th. Eastman Chemical’s dividend payout ratio is currently 44.88%.

Eastman Chemical Co engages in the provision of specialty chemicals. It operates through the following segments: Additives and Functional Products, Advanced Materials, Chemical Intermediates and Fibers. The Additives and Functional Products segment includes chemicals for products in the transportation, consumables, building and construction, animal nutrition, crop protection, energy, personal and home care, and other markets.

Featured Article: What is a Fiduciary? 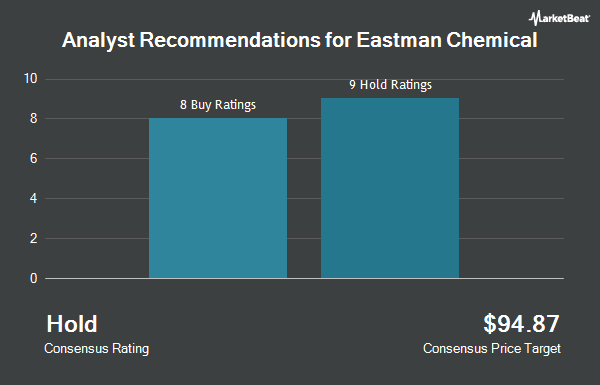 $1.09 Earnings Per Share Expected for Pfizer Inc. This Quarter

Complete the form below to receive the latest headlines and analysts' recommendations for Eastman Chemical with our free daily email newsletter: