NovoCure Limited (NASDAQ:NVCR) Director Gabriel Leung sold 1,000 shares of the firm’s stock in a transaction that occurred on Monday, June 7th. The stock was sold at an average price of $204.55, for a total transaction of $204,550.00. Following the sale, the director now directly owns 73,045 shares in the company, valued at approximately $14,941,354.75. The sale was disclosed in a document filed with the SEC, which is available through the SEC website.

NovoCure (NASDAQ:NVCR) last announced its quarterly earnings data on Thursday, April 29th. The medical equipment provider reported ($0.04) earnings per share for the quarter, missing analysts’ consensus estimates of $0.02 by ($0.06). NovoCure had a net margin of 2.22% and a return on equity of 3.30%. As a group, equities research analysts predict that NovoCure Limited will post 0.08 earnings per share for the current year.

NovoCure Limited, an oncology company, engages in the development, manufacture, and commercialization of Optune for the treatment of a variety of solid tumors. The company markets Optune and Optune Lua, a Tumor Treating Fields delivery system for use as a monotherapy treatment for adult patients with glioblastoma. 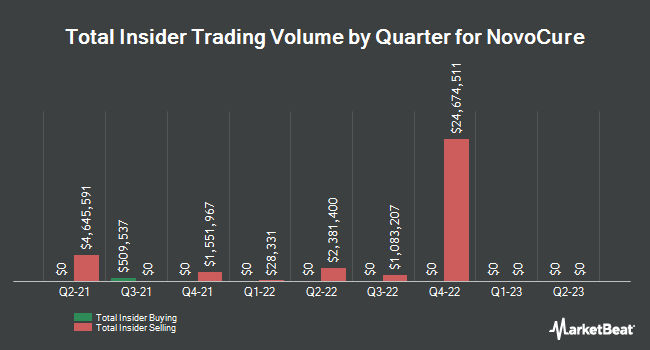 Receive News & Ratings for NovoCure Daily - Enter your email address below to receive a concise daily summary of the latest news and analysts' ratings for NovoCure and related companies with MarketBeat.com's FREE daily email newsletter.

Complete the form below to receive the latest headlines and analysts' recommendations for NovoCure with our free daily email newsletter: