Argent Capital Management LLC decreased its stake in Willdan Group, Inc. (NASDAQ:WLDN) by 7.0% during the 1st quarter, according to its most recent Form 13F filing with the Securities and Exchange Commission. The firm owned 13,005 shares of the construction company’s stock after selling 975 shares during the quarter. Argent Capital Management LLC’s holdings in Willdan Group were worth $534,000 as of its most recent filing with the Securities and Exchange Commission.

Willdan Group (NASDAQ:WLDN) last posted its quarterly earnings data on Thursday, May 6th. The construction company reported ($0.08) EPS for the quarter, hitting the Zacks’ consensus estimate of ($0.08). The company had revenue of $79.09 million during the quarter, compared to the consensus estimate of $106.88 million. Willdan Group had a negative net margin of 2.78% and a positive return on equity of 3.44%. On average, equities research analysts predict that Willdan Group, Inc. will post 0.83 EPS for the current year.

Several equities analysts recently issued reports on WLDN shares. Wedbush reiterated an “outperform” rating on shares of Willdan Group in a research report on Friday, March 12th. Zacks Investment Research lowered Willdan Group from a “hold” rating to a “strong sell” rating in a report on Saturday, May 22nd.

Want to see what other hedge funds are holding WLDN? Visit HoldingsChannel.com to get the latest 13F filings and insider trades for Willdan Group, Inc. (NASDAQ:WLDN). 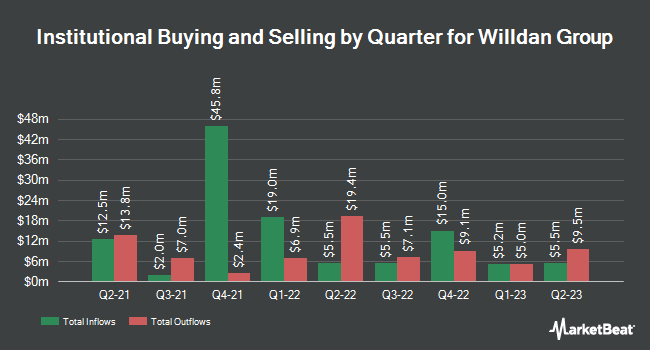 Complete the form below to receive the latest headlines and analysts' recommendations for Willdan Group with our free daily email newsletter: