Alpha DNA Investment Management LLC lowered its stake in Entegris, Inc. (NASDAQ:ENTG) by 32.0% in the 1st quarter, according to its most recent disclosure with the SEC. The fund owned 5,279 shares of the semiconductor company’s stock after selling 2,487 shares during the quarter. Alpha DNA Investment Management LLC’s holdings in Entegris were worth $589,000 at the end of the most recent quarter.

Entegris (NASDAQ:ENTG) last released its earnings results on Tuesday, April 27th. The semiconductor company reported $0.70 EPS for the quarter, missing analysts’ consensus estimates of $0.72 by ($0.02). Entegris had a return on equity of 27.38% and a net margin of 16.26%. The company had revenue of $512.80 million during the quarter, compared to analysts’ expectations of $518.05 million. During the same period in the prior year, the company posted $0.55 earnings per share. The company’s revenue was up 24.4% on a year-over-year basis. As a group, equities research analysts expect that Entegris, Inc. will post 3.19 earnings per share for the current year.

The firm also recently disclosed a quarterly dividend, which was paid on Wednesday, May 19th. Investors of record on Wednesday, April 28th were given a dividend of $0.08 per share. The ex-dividend date was Tuesday, April 27th. This represents a $0.32 annualized dividend and a dividend yield of 0.28%. Entegris’s dividend payout ratio (DPR) is presently 12.60%.

Featured Article: What is a Lock-Up Period? 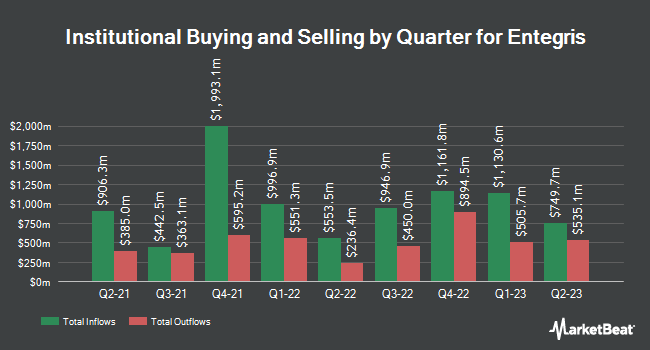 Receive News & Ratings for Entegris Daily - Enter your email address below to receive a concise daily summary of the latest news and analysts' ratings for Entegris and related companies with MarketBeat.com's FREE daily email newsletter.

Berry Data Price Down 5.2% This Week

Manulife Financial Co. Short Interest Down 17.3% in May

Complete the form below to receive the latest headlines and analysts' recommendations for Entegris with our free daily email newsletter: