Norges Bank purchased a new stake in Fair Isaac Co. (NYSE:FICO) in the fourth quarter, according to its most recent Form 13F filing with the Securities and Exchange Commission. The institutional investor purchased 180,212 shares of the technology company’s stock, valued at approximately $92,096,000. Norges Bank owned about 0.62% of Fair Isaac at the end of the most recent quarter.

A number of equities research analysts have recently commented on FICO shares. Jefferies Financial Group lifted their target price on Fair Isaac from $475.00 to $490.00 and gave the stock a “hold” rating in a research note on Monday, January 11th. Needham & Company LLC increased their target price on shares of Fair Isaac from $550.00 to $565.00 and gave the company a “buy” rating in a research report on Friday, January 29th. Zacks Investment Research raised shares of Fair Isaac from a “hold” rating to a “buy” rating and set a $543.00 price target on the stock in a report on Tuesday, March 30th. Finally, Deutsche Bank Aktiengesellschaft initiated coverage on Fair Isaac in a report on Wednesday, January 20th. They set a “buy” rating and a $560.00 price objective for the company. One equities research analyst has rated the stock with a hold rating and six have assigned a buy rating to the company’s stock. The stock currently has a consensus rating of “Buy” and an average target price of $537.00.

Fair Isaac (NYSE:FICO) last announced its quarterly earnings results on Wednesday, January 27th. The technology company reported $2.74 EPS for the quarter, beating the Thomson Reuters’ consensus estimate of $1.58 by $1.16. The firm had revenue of $312.41 million during the quarter, compared to the consensus estimate of $319.65 million. Fair Isaac had a net margin of 18.26% and a return on equity of 98.78%. The business’s quarterly revenue was up 4.7% compared to the same quarter last year. During the same period last year, the firm earned $1.80 EPS. On average, equities research analysts anticipate that Fair Isaac Co. will post 7.37 EPS for the current fiscal year.

Recommended Story: What is the market perform rating? 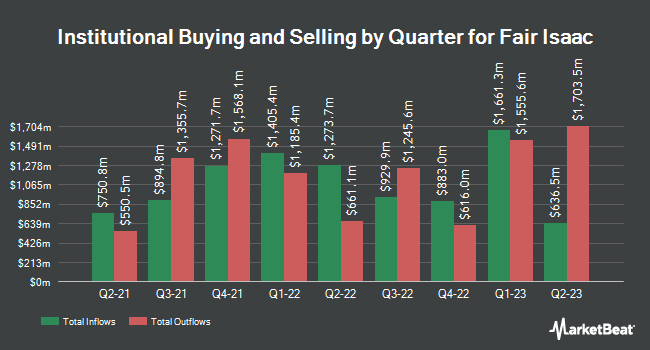 Complete the form below to receive the latest headlines and analysts' recommendations for Fair Isaac with our free daily email newsletter: