The Timken Company (NYSE:TKR) CEO Richard G. Kyle sold 23,505 shares of the business’s stock in a transaction dated Monday, February 22nd. The shares were sold at an average price of $75.08, for a total value of $1,764,755.40. Following the completion of the sale, the chief executive officer now directly owns 316,388 shares of the company’s stock, valued at $23,754,411.04. The sale was disclosed in a legal filing with the SEC, which is available through this link.

The Timken (NYSE:TKR) last announced its earnings results on Thursday, February 4th. The industrial products company reported $0.84 earnings per share for the quarter, missing analysts’ consensus estimates of $0.93 by ($0.09). The Timken had a return on equity of 15.77% and a net margin of 9.80%. The business had revenue of $891.70 million during the quarter, compared to analysts’ expectations of $874.21 million. During the same quarter in the previous year, the firm earned $0.84 EPS. The Timken’s quarterly revenue was down .5% on a year-over-year basis. On average, equities analysts predict that The Timken Company will post 4.16 EPS for the current year.

The firm also recently announced a quarterly dividend, which will be paid on Thursday, March 4th. Stockholders of record on Monday, February 22nd will be paid a $0.29 dividend. This represents a $1.16 dividend on an annualized basis and a dividend yield of 1.52%. The ex-dividend date of this dividend is Friday, February 19th. This is an increase from The Timken’s previous quarterly dividend of $0.25. The Timken’s payout ratio is presently 25.22%. 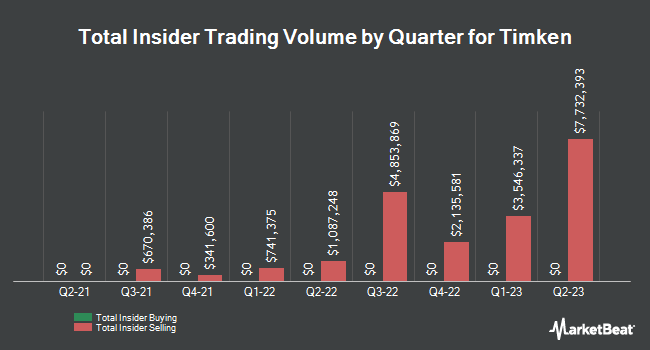 $3.69 Billion in Sales Expected for Parker-Hannifin Co. This Quarter

Daily Ratings & News for The Timken

Complete the form below to receive the latest headlines and analysts' recommendations for The Timken with our free daily email newsletter: