STAG Industrial, Inc. (NYSE:STAG) announced a monthly dividend on Wednesday, January 13th, Wall Street Journal reports. Investors of record on Friday, February 26th will be given a dividend of 0.1208 per share by the real estate investment trust on Monday, March 15th. This represents a $1.45 annualized dividend and a yield of 4.75%. The ex-dividend date of this dividend is Thursday, February 25th.

STAG Industrial (NYSE:STAG) last released its quarterly earnings results on Thursday, November 5th. The real estate investment trust reported $0.15 EPS for the quarter, missing the Thomson Reuters’ consensus estimate of $0.46 by ($0.31). The firm had revenue of $117.30 million for the quarter, compared to analyst estimates of $117.10 million. STAG Industrial had a net margin of 24.61% and a return on equity of 4.97%. The firm’s quarterly revenue was up 14.5% compared to the same quarter last year. During the same quarter in the prior year, the business posted $0.46 EPS. Research analysts predict that STAG Industrial will post 1.86 earnings per share for the current fiscal year.

STAG Industrial, Inc (NYSE: STAG) is a real estate investment trust focused on the acquisition and operation of single-tenant, industrial properties throughout the United States. By targeting this type of property, STAG has developed an investment strategy that helps investors find a powerful balance of income plus growth. 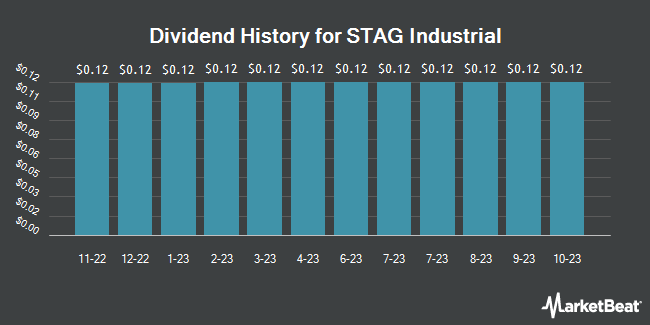 Einsteinium Price Down 12.8% Over Last Week

Complete the form below to receive the latest headlines and analysts' recommendations for STAG Industrial with our free daily email newsletter: