Fruth Investment Management grew its holdings in shares of Matson, Inc. (NYSE:MATX) by 7.9% during the fourth quarter, according to its most recent Form 13F filing with the SEC. The firm owned 6,800 shares of the shipping company’s stock after purchasing an additional 500 shares during the period. Fruth Investment Management’s holdings in Matson were worth $387,000 as of its most recent SEC filing.

Several analysts recently weighed in on MATX shares. Sidoti lifted their price objective on shares of Matson from $50.00 to $60.00 and gave the company a “buy” rating in a research report on Friday, October 9th. BidaskClub raised Matson from a “buy” rating to a “strong-buy” rating in a report on Thursday, January 7th. ValuEngine lowered Matson from a “sell” rating to a “strong sell” rating in a report on Tuesday, January 5th. Finally, Stephens raised Matson from an “equal weight” rating to an “overweight” rating and lifted their target price for the company from $45.00 to $70.00 in a research note on Tuesday, November 3rd. One analyst has rated the stock with a sell rating, four have assigned a buy rating and one has given a strong buy rating to the company’s stock. The stock has a consensus rating of “Buy” and a consensus target price of $54.00.

Matson (NYSE:MATX) last posted its quarterly earnings data on Monday, November 2nd. The shipping company reported $1.63 EPS for the quarter, beating the Zacks’ consensus estimate of $1.58 by $0.05. The business had revenue of $645.20 million for the quarter, compared to analyst estimates of $668.39 million. Matson had a net margin of 5.54% and a return on equity of 14.86%. The business’s revenue for the quarter was up 12.8% on a year-over-year basis. During the same quarter last year, the business earned $0.84 earnings per share. On average, equities research analysts predict that Matson, Inc. will post 3.72 earnings per share for the current year.

Matson, Inc, together with its subsidiaries, provides ocean transportation and logistics services. The company's Ocean Transportation segment offers ocean freight transportation services to the domestic non-contiguous economies of Hawaii, Alaska, and Guam, as well as to other island economies in Micronesia.

Recommended Story: How can you know how many shares are floating? 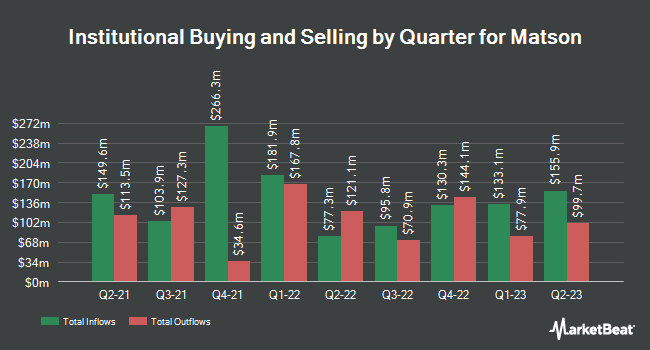 Receive News & Ratings for Matson Daily - Enter your email address below to receive a concise daily summary of the latest news and analysts' ratings for Matson and related companies with MarketBeat.com's FREE daily email newsletter.

Zacks: Analysts Expect 3M Will Announce Earnings of $2.19 Per Share

Complete the form below to receive the latest headlines and analysts' recommendations for Matson with our free daily email newsletter: