Complete the form below to receive the latest headlines and analysts' recommendations for Pebblebrook Hotel Trust with our free daily email newsletter:

Oregon Public Employees Retirement Fund lessened its stake in Pebblebrook Hotel Trust (NYSE:PEB) by 4.7% in the second quarter, according to its most recent disclosure with the Securities and Exchange Commission. The fund owned 48,534 shares of the real estate investment trust’s stock after selling 2,408 shares during the quarter. Oregon Public Employees Retirement Fund’s holdings in Pebblebrook Hotel Trust were worth $663,000 as of its most recent SEC filing.

The business also recently declared a quarterly dividend, which was paid on Wednesday, July 15th. Investors of record on Tuesday, June 30th were given a dividend of $0.01 per share. The ex-dividend date was Monday, June 29th. This represents a $0.04 annualized dividend and a yield of 0.38%. Pebblebrook Hotel Trust’s dividend payout ratio (DPR) is presently 1.52%.

See Also: What is insider trading? 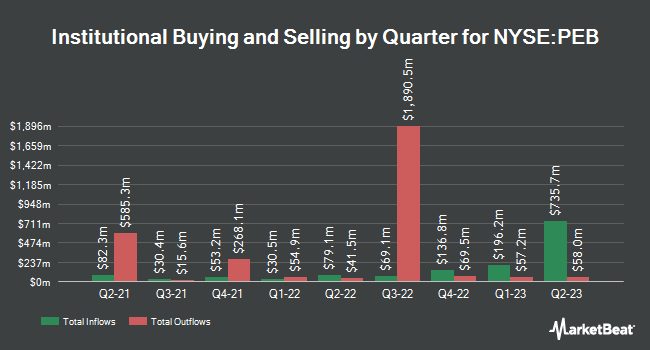