Complete the form below to receive the latest headlines and analysts' recommendations for AmerisourceBergen with our free daily email newsletter:

Wall Street analysts expect AmerisourceBergen Corp. (NYSE:ABC) to announce earnings of $1.69 per share for the current quarter, according to Zacks. Five analysts have issued estimates for AmerisourceBergen’s earnings. The lowest EPS estimate is $1.59 and the highest is $1.77. AmerisourceBergen posted earnings per share of $1.60 during the same quarter last year, which indicates a positive year over year growth rate of 5.6%. The business is expected to issue its next earnings report on Thursday, January 30th.

On average, analysts expect that AmerisourceBergen will report full-year earnings of $7.54 per share for the current year, with EPS estimates ranging from $7.42 to $7.60. For the next fiscal year, analysts expect that the business will report earnings of $8.10 per share, with EPS estimates ranging from $7.52 to $8.31. Zacks Investment Research’s earnings per share calculations are a mean average based on a survey of analysts that cover AmerisourceBergen.

The firm also recently disclosed a quarterly dividend, which was paid on Monday, December 2nd. Stockholders of record on Monday, November 18th were given a $0.40 dividend. This represents a $1.60 annualized dividend and a dividend yield of 1.89%. The ex-dividend date was Friday, November 15th. AmerisourceBergen’s payout ratio is currently 22.57%.

See Also: What does a market perform rating mean? 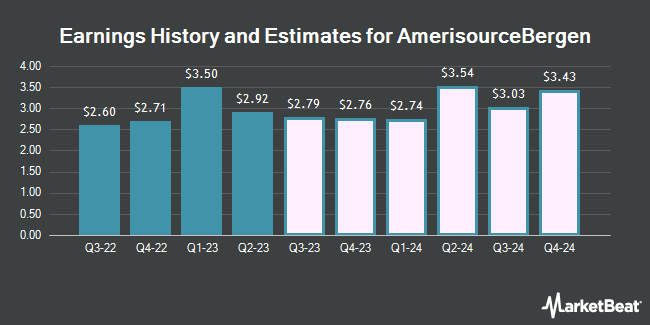