Complete the form below to receive the latest headlines and analysts' recommendations for W&T Offshore with our free daily email newsletter:

Equities analysts expect W&T Offshore, Inc. (NYSE:WTI) to announce sales of $151.01 million for the current fiscal quarter, according to Zacks. Three analysts have made estimates for W&T Offshore’s earnings. The highest sales estimate is $155.54 million and the lowest is $147.40 million. W&T Offshore posted sales of $143.42 million during the same quarter last year, which would indicate a positive year over year growth rate of 5.3%. The company is scheduled to report its next quarterly earnings results on Wednesday, February 26th.

According to Zacks, analysts expect that W&T Offshore will report full year sales of $532.55 million for the current fiscal year, with estimates ranging from $528.70 million to $538.54 million. For the next year, analysts anticipate that the business will report sales of $596.27 million, with estimates ranging from $573.00 million to $617.02 million. Zacks Investment Research’s sales calculations are an average based on a survey of sell-side analysts that that provide coverage for W&T Offshore.

W&T Offshore (NYSE:WTI) last announced its earnings results on Wednesday, October 30th. The oil and gas company reported $0.13 earnings per share (EPS) for the quarter, topping the consensus estimate of $0.05 by $0.08. The business had revenue of $132.20 million for the quarter, compared to analysts’ expectations of $133.52 million. W&T Offshore had a negative return on equity of 29.02% and a net margin of 38.63%. The business’s revenue for the quarter was down 13.9% on a year-over-year basis. During the same period last year, the firm posted $0.30 earnings per share.

See Also: What is Cost of Capital? 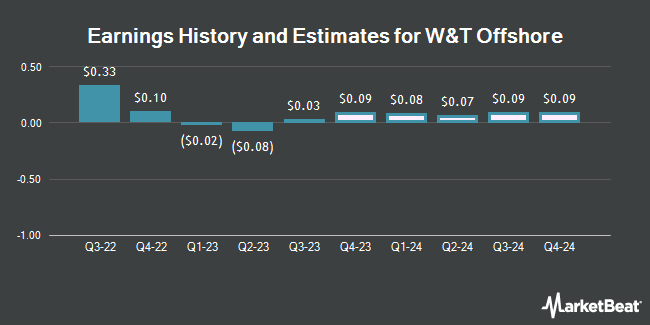