Complete the form below to receive the latest headlines and analysts' recommendations for Tripadvisor with our free daily email newsletter:

New Mexico Educational Retirement Board lessened its stake in Tripadvisor Inc (NASDAQ:TRIP) by 4.7% in the 3rd quarter, according to its most recent filing with the SEC. The fund owned 8,028 shares of the travel company’s stock after selling 400 shares during the period. New Mexico Educational Retirement Board’s holdings in Tripadvisor were worth $311,000 at the end of the most recent quarter.

Tripadvisor (NASDAQ:TRIP) last released its quarterly earnings data on Wednesday, November 6th. The travel company reported $0.58 earnings per share (EPS) for the quarter, topping the Thomson Reuters’ consensus estimate of $0.53 by $0.05. The business had revenue of $428.00 million during the quarter, compared to analysts’ expectations of $459.39 million. Tripadvisor had a net margin of 7.44% and a return on equity of 9.18%. The company’s revenue for the quarter was down 6.6% on a year-over-year basis. During the same period in the previous year, the company earned $0.72 EPS. On average, sell-side analysts expect that Tripadvisor Inc will post 1.18 earnings per share for the current year.

TripAdvisor, Inc operates as an online travel company. It operates in two segments, Hotel and Non-Hotel. The company operates TripAdvisor-branded Websites, including tripadvisor.com in the United States; and localized versions of the Website in 48 markets and 28 languages. It also manages and operates other travel media brands that provide users the comprehensive travel-planning and trip-taking resources in the travel industry, such as airfarewatchdog.com, bookingbuddy.com, cruisecritic.com, familyvacationcritic.com, flipkey.com, thefork.com, holidaywatchdog.com, housetrip.com, jetsetter.com, niumba.com, onetime.com, oyster.com, seatguru.com, smartertravel.com, tingo.com, vacationhomerentals.com, and viator.com, as well as www.bokun.io and holidaylettings.co.uk.

Want to see what other hedge funds are holding TRIP? Visit HoldingsChannel.com to get the latest 13F filings and insider trades for Tripadvisor Inc (NASDAQ:TRIP). 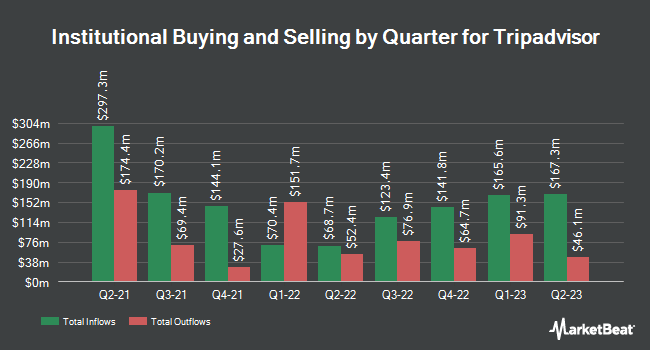