Complete the form below to receive the latest headlines and analysts' recommendations for Outfront Media with our free daily email newsletter:

Outfront Media Inc (NYSE:OUT) declared a quarterly dividend on Tuesday, October 22nd, Zacks reports. Investors of record on Friday, December 6th will be given a dividend of 0.36 per share by the financial services provider on Tuesday, December 31st. This represents a $1.44 annualized dividend and a yield of 5.81%. The ex-dividend date is Thursday, December 5th.

Outfront Media (NYSE:OUT) last released its earnings results on Monday, November 4th. The financial services provider reported $0.27 earnings per share for the quarter, missing the Zacks’ consensus estimate of $0.62 by ($0.35). Outfront Media had a net margin of 8.72% and a return on equity of 13.54%. The company had revenue of $462.50 million during the quarter, compared to analysts’ expectations of $461.97 million. During the same quarter in the previous year, the firm earned $0.61 earnings per share. The firm’s revenue was up 11.7% compared to the same quarter last year. As a group, analysts forecast that Outfront Media will post 2.19 EPS for the current fiscal year.

OUTFRONT leverages the power of technology, location and creativity to connect brands with consumers outside of their homes through one of the largest and most diverse sets of billboard, transit, and mobile assets in North America. Through its ON Smart Media platform, OUTFRONT is implementing digital technology that will fundamentally change the ways advertisers engage audiences on-the-go.

Featured Story: What is a Special Dividend? 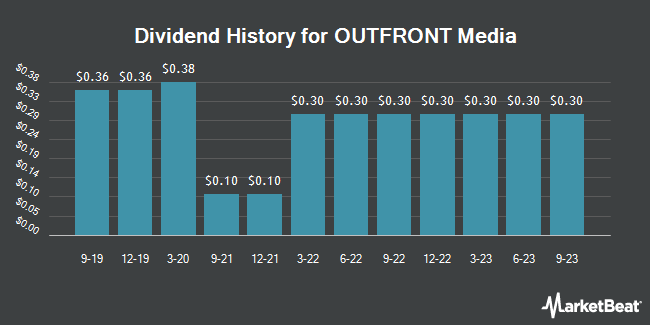