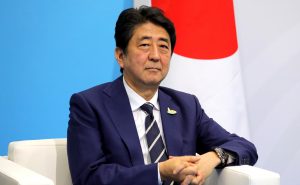 Prime Minister Shinzo Abe of Japan has been caught up in a scandal involving an improper public land sale at a steeply discounted price to an ultraconservative education group. An internal investigation by the Finance Ministry concluded that unidentified officials tampered with official documents related to the land deal to remove references to Abe’s wife, Akie Abe, and senior members of his party.

Last February, Mr. Abe said he would resign as prime minister and a member of Parliament if evidence emerged linking him to the land deal. No such evidence ever surfaced. Finance minister Taro Aso now says bureaucrats altered the documents between February and April last year.

The Finance Ministry submitted an 80-page report to the governing Liberal Democratic Party on Monday admitting that ministry bureaucrats had deleted portions of 14 documents related to the land sale. Bureaucrats removed Mrs. Abe’s name and alleged comments from a description of a meeting between Finance Ministry officials and administrators of the Moritomo education group. Mrs. Abe was a onetime honorary principal of a planned Moritomo elementary school.

The report also showed that Finance Ministry officials had removed the names of several Liberal Democratic lawmakers from the land sale documents. A reference to Nippon Kaigi, a prominent right-wing group of which Abe is a member, was also deleted. Aso suggested that the document tampering was limited to a handful of bureaucrats.

The findings caused an uproar in Japan. Critics have called for Aso to resign over the matter. Last week, tax agency chief Nobuhisa Sagawa, who formerly oversaw the Finance Ministry bureau dealing with the land sale, resigned from his current post. A Finance Ministry employee in the branch office that had dealt with the land sale committed suicide earlier this month.

The prime minister apologized shortly after the disclosures became public. The latest revelations would be politically damaging for him as he prepares to seek a third term. Opposition lawmakers have long questioned Mr. Abe’s denials of involvement in the land sale and have made repeated calls for a broader investigation. A survey over the weekend by Yomiuri Shimbun found that 80 percent of respondents believed the government was mishandling the Moritomo case.