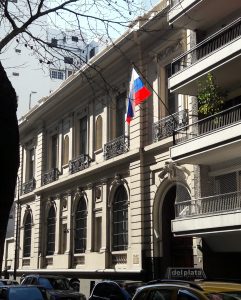 Six people have been arrested in connection with the discovery of hundreds of pounds of cocaine in the Russian Embassy in Buenos Aires, Argentina. The 14-month cocaine smuggling investigation was conducted by the Buenos Aires police, the Russian Interior Ministry, and Argentine border guards. Patricia Bullrich, Argentina’s minister of security, said, “We have dismantled an international cocaine trafficking organization operating between Argentina, Russia and Germany.”

Roughly 389 kilograms of cocaine, or more than 850 pounds, were discovered at a school on the grounds of the embassy in December 2016. The Russian ambassador to Argentina gave Argentine border guards a key to enter the school after the discovery of what was thought to be 16 pieces of luggage filled with drugs. Authorities said the drugs have a street value in Russia of about $61 million.

The guards confirmed the contents of the bags and took them to a separate location to replace the cocaine with flour and fit the bags with tracking devices. The authorities were careful to ensure that none of the drugs ever traveled to Russia, only the flour. The investigators had to get creative to secure that much flour in such a short amount of time. Bullrich said, “At 3 a.m. we had to send people from the border police to buy the 389 kilograms of flour to the central market (in Buenos Aires) because no one had 389 kilograms in a warehouse.”

The suspects attempted to move the cargo out of the country as diplomatic luggage in an official Russian plane in December 2017. Two Russian men were arrested when they went to it pick up. Three Argentine customs officials who traveled to Russia to monitor the shipment were also arrested. The authorities in Moscow made the arrests.

A former Russian diplomatic worker and an Argentine police officer were also among those arrested. The former embassy official helped plan the shipment with the aid of the two Russian-Argentine citizens. An unidentified person, referred to as “Mr. K”, supplied the drugs to an embassy contact for shipping to Russia. Mr. K remains at large in Germany, despite an international order for his arrest.