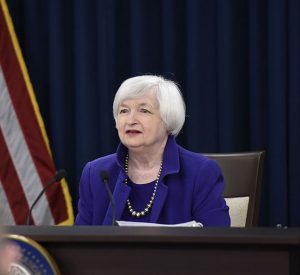 Federal Reserve Chair Janet Yellen has sketched out a bright outlook for the U.S. economy in coming months at a seminar in Washington. Yellen said in her prepared comments that “risks to global growth have receded somewhat” and to “expect growth to continue to improve over the near term.” Yellen made her comments in a speech to a panel that included central bank officials from China, Japan, and the European Central Bank.

Yellen has presided over a sustained recovery from the global financial crisis. The U.S. jobless rate has now fallen past its pre-crisis low, dropping to 4.2 percent, its lowest level since 2001. Wages have been showing early signs of life, but has been slow to accelerate. The economy’s growth, as measured by the gross domestic product, might have slowed slightly in the July-September quarter.

Central bankers believe the impact of the recent hurricanes will likely slow economic growth slightly, but only temporarily. The hurricanes that struck Texas, Florida, Puerto Rico and the Caribbean caused enormous damage. Yellen noted, “While the effects of the hurricanes on the U.S. economy are quite noticeable in the short term, history suggests that the longer-term effects will be modest and that aggregate economic activity will recover quickly.”

Yellen also recognized that inflation has been surprisingly low, despite a strong labor market and a healthy global economy. Inflation has remained below the Fed’s 2 percent goal. After stripping out volatility of food and fuel, inflation came in at 1.3 percent in August. The low inflation has puzzled policy makers. Yellen said, “My best guess is that these soft readings will not persist, and with the ongoing strengthening of labor markets, I expect inflation to move higher next year.”

Her comments suggested that the central bank will soon resume raising interest rates. Yellen said that the U.S. central bank expects to continue to raise interest rates gradually. Officials project another interest-rate increase in 2017, with many seeing the move coming in December. It would be the third rate hike this year.

The central bank made a decision at its meeting last month to leave its benchmark short-term rate unchanged in a range of 1 percent to 1.25 percent. Central bankers also voted last month to begin unwinding their balance sheet. The Fed amassed its enormous portfolio of bonds after the 2008 financial crisis to hold down long-term loan rates for consumers and businesses. Yellen said, “Our balance sheet will decline gradually and predictably.”