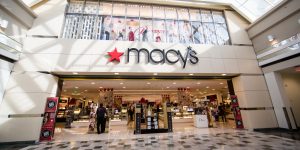 Shares of popular retailer Macy’s were down 10 percent in premarket trading on Thursday after the department store operator reported yet another in a trend of dismal results that appear to demonstrate the company is failing to keep up with current trends. Indeed, Macy’s showed a 5.2 percent drop in comparable sales in the first quarter of 2017, which is the 8th consecutive quarterly decline and, perhaps more importantly, a bigger drop than in any other recent quarter.

Now, in February, the company had originally said it expected sales will drop in 2017. This decline, however, was much bigger than the 3.1 percent Wall Street had been expecting. Most importantly, though, Macy’s retail profit has fallen nearly 40 percent.

But Macy’s struggle are not really anything new. The traditional retail model—the shopping mall, essentially—has not been very popular, and seeing decline in recent years. On the other hand, consumers are flocking to the ease and convenience of websites like Amazon.com and discount retailers like TJ Maxx to find good deals. This, of course, has seen the closure of many stores from some of what used to be the biggest names in retail.

With all that in mind, then, Macy’s recently-installed Chief Executive Office, Jeff Gennette, comments on some of the company’s new initiatives. He specifically points at programs in competitive areas like women’s shoes, fine jewelry, and furniture. He also warns investors that it is going to take a little time to assuage a little more life back into these departments.

The results signal that new Chief Executive Officer Jeff Gennette has a tougher job ahead of him than Wall Street imagined. The executive, who began running the chain in late March, faces declining foot traffic in malls, race-to-the-bottom discounts among his competition, and a shrinking customer base.

Indeed, Gennette is betting that the retailers will be able to rebound using common retail strategies: cutting expenses, closing underperforming stores, and, alas, eliminating a few jobs. He also expresses the company’s need to invest more in e-commerce and in its off-price brand, Backstage.

These efforts, he says, have been slow to the take, but they are still working: “We are focused on taking actions to stabilize our brick-and-mortar business. At the same time, we will invest to aggressively grow our digital and mobile business.”